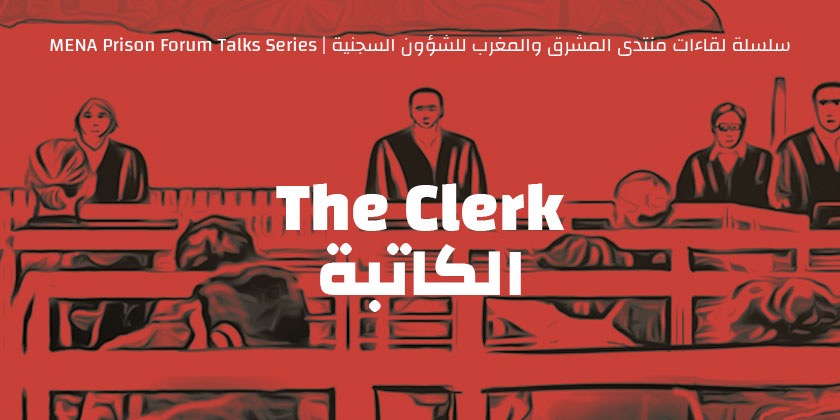 Artwork: Courtesy of Dumuzi
Talks: Organized by MPF, Heinrich Boell Foundation, and UMAM D&R
THE CLERK
A Conversation with the Podcast Production Team
Via Zoom

On February 17, the MPF hosted the team involved in the podcast drama series “The Clerk” to discuss their backgrounds and the production of the project. A six-episode series “The Clerk” narrates elements of the trial of two Syrian intelligence officers in the German city of Koblenz through the eyes of fictional characters attending the proceedings. The production team of the podcast discussed the process, the legal sources, and the motivations behind choosing dramatic podcasting as a tool for communication. In addition, they discussed the reasons for selecting to focus specifically on the Koblenz trials, and the intentional use of using the eyes of the clerk.

With 40 participants, the session addressed how and why the producers and the actors came up with the idea of having an artistic/semi-fictional reading of the Koblenz trials that lasted from April 2020 to January 2022. MPF coordinator, Mina Ibrahim, opened the session by pointing to how the series intersects with the core of the mission of the MPF, that is to link art to advocacy work in order to make human rights discourses and rhetoric more accessible to the wider public. Afterwards, Anna Fleischer, head of the Heinrich Böll Foundation Beirut Office, noted that when the production team approached her with the idea of the series in quest of logistical and financial support, she was not sure if the proposal is doable, given its unprecedented nature. However, she later noticed how the team’s passion for the project was derived not only from their political intentions to analyze and debate what the Koblenz trials mean for the process of transitional justice in Syria but also, and more importantly, from personal and emotional attachments to the cause. In the same vein, Jaber Baker, one of the actors and the producers, illustrated that the team included members who were imprisoned and tortured by Anwar Raslan, who was found guilty by the Koblenz court and got a life sentence for committing crimes against humanity. While not all of the actors of the series had previous experiences in similar projects, they were able to express their grievances and traumas, and to compensate for their absence from the courtroom in Koblenz.

Along the same lines, Bushra Joud, the writer of the episodes, emphasized that adding fictional characters to the Koblenz trials allowed her to excavate what many Syrians were not able to reach, either because of the absence of Arabic translation of the trials or because of the difficult, technical legal terms used by lawyers and human rights experts. Notably, the challenges of translating the proceedings at the trials was also addressed during a previous MPF talk that hosted lawyer Fritz Streiff and Syrian journalist and filmmaker Amer Matar. They both admitted that many Syrians felt isolated from the trials not only because they happened far away from the original venues of the crimes, that is Syria, but also in a language that does not fully address the victims’ and the survivors’ ordeals. In this regard, by inventing the character of the German clerk and by giving her an Arabic tongue, Bushra Joud tried to give a presence to Syrians and to the Syrian dialect.

Bushra’s emotional contribution to the discussion was complemented by Jaber Baker when he was asked about the targeted audience of the series. He stated that the series is mainly directed to those who are not aware of the trials and live in Syria. Especially with the hard conditions they face, building a dramatic approach for the trials was a suitable format to understand and building a relationship with its different stages. Furthermore, Lenda Belal, who played the role of the clerk and who was responsible for the training of the actors stated the topic was challenging, especially that she had to carry out the training via online platforms given the restrictions of COVID-19. She also pointed to how she was afraid that the texts read by the actors might lead to mental and physical breakdowns. At some point, she had to ask if exposing former prisoners to this kind of work can help them to heal. Indeed, psychological support was a main concern of the production while executing their project. Jaber Baker confirmed that the team developed their ideas with psychologists who monitored them for all red flags, and as a team they were always keen to check in on each other.

In the Q&A, participants corroborated and stressed the feeling of inaccessibility to the Koblenz trials because of the language barriers, as live translation of the court proceedings was not offered, meaning that even to those who were involved in the proceedings and physically present at the courthouse were excluded from the developments in front of them. Anna Fleisher stressed that the concept of universal jurisdiction is new in Germany, so even internally to the country there is a learning curve on how to hold such trials. A commonly expressed sentiment by participants and by members of the team was gratitude for the podcast, as it allows for reflection on what Syrians and the country has been through over the past eleven years, and to consider the moment as giving limited, but some positive outlooks on accountability and justice for Syrians.