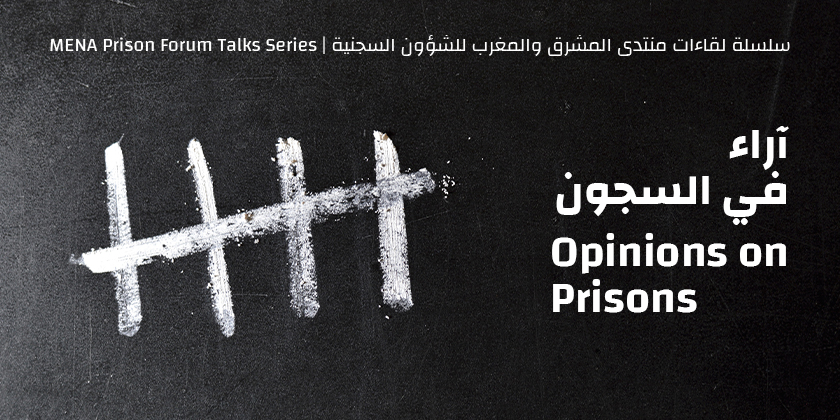 Talks: Organized by MPF and UMAM D&R
OPINIONS ON PRISONS
Via Zoom
Register for the event

The MENA Prison Forum hosted an active group talk on 27 October 2022 on the psychological and social effects of Syrian torture and imprisonment. Jaber Baker, long-term MPF partner and himself an ex-prisoner from Syria’s Sednaya prison, modered the conversation between

With an audience of 80 participants, Jaber Baker opened the session by asking about terminology: if the label ex-detainee or survivor was better to describe those who spent time in the Syrian prison system. This led Dr. Nofal to speak about the collective nature of the prison experience in Syria: the system does not just impact the individuals who are imprisoned, but there is a collective experience of the Syrian prison system across those detained and their families and communities. Yet there does not exist a term to capture this shared, extended prison experience in Syra. While he stressed this commonality of prison experience among ex-prisoners, he noted that the needs of ex-prisoners related to what they experienced vary, based on the age, the level of torture experienced, the type of violence the individual was subjected to, which vary among prisoners but also among detention centers. The question was posed about to what extent can individuals and collectives that have experienced these conditions re-enter life again, including the family and friends of the detained who hear about the experiences of their loved ones upon their release. Dr. Beetar added that what also differs between individuals is personal psychological structures, meaning their resistance or flexibility to traumatic events differs. He also noted that depending on a person’s upbringing, and even their approach or exposure to prison before being detained, could have different impacts on their emotional and mental well-being during and after being detained.

Baker then noted that in Syria, the exact reason for being detained is usually not clear and the arbitrary nature of imprisonment is another obstacle to overcome in the aftermath of being detained. Lakkeh commented that on top of the arbitrariness of detention, the fear and anticipation of being detained was deeply psychosocially impactful: no one could even ask around in Syria about how to preserve in prison because the question itself would put you at risk of suspicion or detention. Another seemingly arbitrary nature of detention was of who survived and managed to leave detention and who succumbed to the violence and torture, leaving prisoners no explanation of why certain prisoners survived and why others did not.

The conversation also addressed secondary psycho-social effects of being imprisoned in Syria: including the ostracization of ex-detainees once they are released and the forced exile of many Syrians who left Syria after being detained and released. The fear of being imprisoned in Syria has also been so high that individuals have chosen to stay in unsafe areas and be killed instead of surrendering to the regime, such as those who refused to leave Ghouta under the siege.

Another psychosocial impact of imprisonment in Syria that was addressed was the embezzlement of money from families of detainees for information on the prisoners and how the Syrian regime uses these dynamics to hold whole families hostage and financially supporting the regime as they pay either for details on their loved ones or for their release. The Association of Detainees and the Missing in Sednaya Prison (ADMSP) in 2021 estimated in a 2021 report that the  Syrian regime has collected hundreds of millions of US dollars since 2011 through financial exportation from families of detainees. Baker built upon the term “regime hostages” as a suitable expression for how individuals were used against one another to extract information and to spread suffering among Syrians, and posed the question of how can the family members and friends of ex-detainees be supported for what they themselves have experienced, both while their loved ones were detained and upon hearing what they went through.

Dr. Beetar evoked how support can differ by the type of community or society individuals live in, and the unique circumstances around what the family experienced. Some families suffer from the psychological impact of not knowing what happened to a loved one, while others suffer also logistically and legally as a result of not having paperwork such as a death certificate that would then allow for inheritance and other laws to be applied, such as the possibility for wives to remarry. The social ostracization of families who have had members imprisoned in Syria was very strong, resulting in years of being socially ignored by neighbors and their community on top of having a family member missing. The question is how to be able to reintegrate these shunned families, many of whom have also lost a primary breadwinner on top of the social stigma. Lakkeh added that families and communities of the detained exist in this limbo of being hopeful and mourning those detained, and the fear of going to inquire into the conditions of their loved one in case of harsher retribution.

The sheer number of these cases is huge, as there are an estimated 560,000 detainees in Syria. Further adding to this number is the number of those forcibly disappeared, for which the Syrian Network for Human Rights has a list of more than 100,000 documented forcibly disappeared Syrians. Those forcibly disappeared are even more shrouded in mystery and ambiguous loss. This ambiguous nature of the prison and disappearance system in Syria is one that the Syrian regime capitalizes on, and will intentionally release individuals arbitrarily to foster hope, confusion, and uncertainty in the balance of prisoners alive or dead. Some of the most heartbreaking evidence of the trauma of this ambiguous system are the large crowds that rush to greet prisoners when they are released in a desperate search for their loved ones or information about their loved ones. Dr. Beetar stressed that the psychosocial situation is a crisis due to the immense number of cases and the many other needs of Syrians today, ranging from security, food, accommodation, and family reunification to other social needs. The needs are also at an individual, family, and community level, making the overall needs many and varied. Another level of psychosocial support needed is the destruction of the social fabric between individuals, centered around the use of informants to provide information and betray members of their community in accusations and reports to the regime.

The discussion session allowed participants to share their own stories and experiences of imprisonment in Syria, including trauma manifestations in families who have had to experience secondary trauma hearing about the prison conditions, as well as some cases of psychosis in the form of paranoia of being monitored, and even emotional and mental challenges leading to depression and suicide. The conversation also addressed the structural trauma of just living in an authoritarian regime such as Syria, even without the specific trauma of the prison system. Audience members also explored counterintuitive reactions from prisoners post-release, including ones who express a desire to return to prison out of a sort of nostalgia for the experience as well as immense guilt for being released. Participants in the talk who had been previously detained described their personal psychosocial needs including the reaction they had during this talk in remembering their experience in prison even years later. In response, the talk ended with a grounding exercise for all participants to help the transition out of the talk.