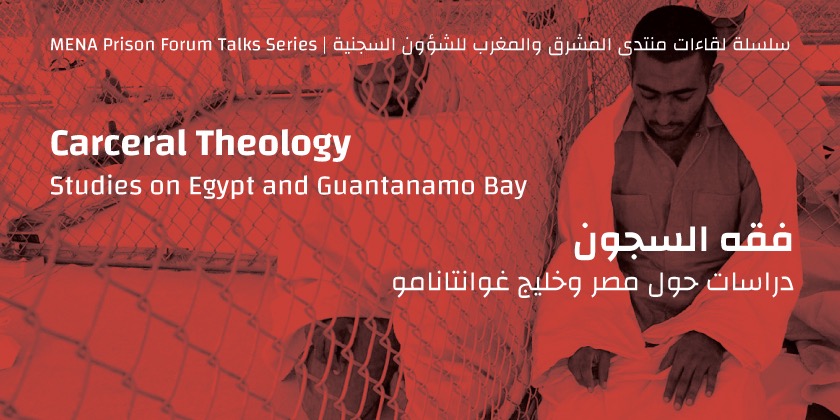 The MENA Prison Forum (MPF) hosted its fifteenth and last talk of 2022 on December 15, 2022. The talk “Carceral Theology: Studies on Egypt & Guantanamo Bay” was motivated by an awareness of a lack of religious consideration in human rights reports on the MENA prison system. The MPF has a goal to engage in creative and unique ways in the space between activism, academia, and art, and to use elements from select fields to complement one another. This awareness of an important element of the prison experience in the MENA region, and the excellent work being done by academics, led to this talk with Dr. Asim Qureshi and Dr. Walaa Quisay.

Dr. Qureshi has a background in international and Islamic law, and has a Ph.D. in International Conflict Analysis. He is currently the Research Director of the advocacy group CAGE, and since 2003 he has specialized in investigating the impact of counterterrorism practices worldwide. He has published a wide range of NGO reports, academic journals and articles, and is the author and editor of several books. Since 2010, he has been advising legal teams involved in defending terrorism trials in the US and at Guantanamo Bay, Cuba. Dr. Quisay on the other hand has a DPhil from the University of Oxford at the Faculty of Oriental Studies. She is currently a Leverhulme Early Career Fellow at the University of Edinburgh. She researches Muslim carceral theology and prison literature, and her research interests include Muslim political subjectivities, carceral theology, theodicy, spirituality, and traditionalism and modernism in contemporary Islamic thought.

This talk between Dr. Qureshi and Dr. Quisay centered on the work they are undertaking together on the religious practices of political prisoners in Egypt and Guantanamo Bay. They opened the session with Dr. Quisay speaking about how religion is currently regarded by the prison system, noting that it is seen as a “pathologization” of religion in prison settings, as it is seen as an ostensible indicator of danger if prisoners become more religious or adherent while incarcerated. She traced the beginning of her interest in religious dynamics in prison, noting her personal exposure and awareness of political prisoners in Egypt and her conversations with sheikhs in Western settings who promoted narratives of individuals who had either had traumatic experiences or lived through periods of upheaval developing warped and/or transformed engagement and views of religion. Dr. Quisay instead believed that a fuller, more developed engagement with these cases was needed, and as she began to exchange with Dr. Qureshi, they began to identify common dynamics and themes in their work. Dr. Qureshi added that their work is indeed a product of ongoing conversations they have been having over the years, and has emerged also from his work straddling the fields of academic and activist work.

Both Dr. Qureshi and Dr. Quisay provided insights into their work through anecdotes they have heard, read, and engaged with in their encounters with ex-detainees, Dr. Qureshi through his work with individuals held in U.S detention centers such as Guantanamo, Bagram, Kandahar, and CIA black sites, and Dr. Quisay through her work on Egyptian prisons.

Dr. Qureshi traced prisoner experiences from their detention in countries such as Afghanistan and Pakistan and their travel to various detention sites through deportations and extraordinary renditions. He noted the importance of understanding U.S. carceral dynamics in sites outside of the United States, as he found it vital to trace detention experiences across all of the sites in which prisoners were held to inform the entire system of repression and religious dynamics in these locations. He particularly noted the importance of looking at dynamics in Egypt, as torture and detainment in the country are infamous and played a large role in the overall global “war on terror,” notably in the Egyptian interrogation of Ibn Sheikh al-Libi that produced the reported connection between Saddam Hussein and Al-Qaeda that subsequently was used to justify the invasion of Iraq in 2003, despite this information being incorrect. Therefore, the torture cells in Egypt are intricately tied to the overall U.S approach to detention and interrogation in recent years.

Dr. Qureshi and Dr. Quisay both addressed in detail the ways in which prisoners’ treatment deprived and impacted their ability to observe their faith. Dr. Qureshi spoke of testimonies he has heard from ex-detainees in Guantanamo Bay, recounting how sensory deprivation such as the inability of prisoners to know their location in time and space, two important elements that allow Muslims to guide their prayers according to the direction of Mecca and the time and date for specific prayers. He recounted how this deprivation was intentionally done by the Americans to impede prisoners’ ability to observe their faith, and how prisoners did the best of their ability to circumvent these deprivations. He spoke of detainees who figured out ways to track time, such as being able to steal glances at guard wristwatches and measuring time passed to try to adhere to prayer schedules. He additionally spoke of prisoners who when they arrived in Guantanamo Bay, they were not aware that they had even left the Middle East, and therefore were completely disoriented as to the direction to pray.  Conversely, Dr. Quisay’s work with former detainees in Egyptian prisons granted her access to testimonies on perceptions of religion while detained. She noted how Egyptian prisons are often divided into cells for specific Islamic groups, regardless of prisoner affiliation. She spoke of efforts prisoners made to not violate religious conditions, such as men sleeping side by side, which was difficult to manage in tightly packed cells in which prisoners would have to sleep close together for lack of space. She also noted efforts prisoners made to overcome isolation between individual cells by praying communally despite their division.

Dr. Qureshi and Dr. Quisay both noted another deprivation in prison that has religious implications. One of note is the importance of water and cleanliness in Islam. Dr. Qureshi described prison conditions in Bagram and Kandahar in which water and personal hygiene procedures were deliberately withheld from prisoners and actually further used to degrade and humiliate them in knowing violation of religious concerns. He spoke of prisoners being kept in cages in which bathroom needs had to be undertaken publicly and under the ridicule of female guards. He articulated that prisoners described the humiliation of nudity and lack of privacy impacted them on the same level of actual applied torture techniques they experienced. He further noted other elements of personal hygiene that Islam requires from individuals, such as the regular removal of pubic hair. In absence of razors provided to detainees, he spoke of individuals who would physically pull out their pubic hair in order to remain in observation of this religious requirement, despite the immense physical pain this caused. He further shared evidence of American officials using religious prohibitions to interrogate and “break” detainees: one such story he recounted was a consultant suggesting that a prisoner be covered in menstrual blood and not allowed to clean himself, thus not allowing him to perform his prayers without being ritually clean and the impact of this would coerce information sharing. Dr. Quisay provided context to religious elements that allow for modifications of religious requirements under captivity or under fear. The religious exemptions vary among conditions and among followers, leading to divided application and adherence within the prisons.

Dr. Quisay provided in-depth accounts of gendered experiences of detention in Egypt, such as through the case of one interlocutor who was concerned both about praying without ritually purifying herself after she stopped menstruating and about praying in front of the guards who could use her religious adherence as evidence for her posing a danger. She negotiated these dynamics in a personal way, praying internally and then making up her prayers once she was detained in another location after having been able to clean herself and once she was able to safely pray more openly.

Some of the other disparate but vital elements of the discussion revolved around the sentiment expressed by prisoners of their reliance on god as infinitely merciful towards their conditions and the imposition of the detainment on their ability to fully practice their faith. Another notable dynamic that Dr. Qureshi highlighted was that of the U.S approach to Islam itself as the enemy, particularly at the beginning of the “war on terror.” He noted the naming of cells in Bagram being named after notable “battles” between the U.S and the “Muslim” world, such as “Tripoli” and “Somalia,” and the use of materials such as pornographic images to offend and coerce adherent prisoners. The conversation ended with contributions from other participants, exploring dynamics of other religious minorities in the prison and expressing gratitude for the valuable contribution of this work to prison studies in embracing religion as a fundamental element of personhood in prison.

Dr. Asim Qureshi graduated in Law (LLB Hons, LLM), specializing in International Law and Islamic Law. He completed his Ph.D. in International Conflict Analysis from the University of Kent. He is the Research Director at the advocacy group CAGE, and since 2003 has specialized in investigating the impact of counterterrorism practices worldwide. He has published a wide range of NGO reports, academic journals and articles. He has written the books “A Virtue of Disobedience” (Unbound, 2019) and “Rules of the Game: Detention, Deportation, Disappearance” (Hurst, Columbia UP, 2009), as well as a chapter in “What is Islamophobia?” (Pluto Press, Chicago UP, 2017). He is the editor of the book “I Refuse to Condemn: Resisting Racism in Times of National Security” (Manchester UP, 2020). Since 2010, he has been advising legal teams involved in defending terrorism trials in the US and at Guantanamo Bay, Cuba.

Dr. Walaa Quisay is a Leverhulme Early Career Fellow at the School of Divinity. She researches Muslim carceral theology and prison literature. From 2021 to 2022 she was a Postdoctoral Research Associate at the University of Manchester working on carceral Fiqh and non-violent civil disobedience in Islam. From 2019-2020 She was a teaching fellow at the University of Birmingham and Istanbul Sehir University. She also received her DPhil from the University of Oxford at the Faculty of Oriental Studies. She has completed her first book to be published with Edinburgh University Press on Neo-Traditionalism in the West.  She is now working on her second book with Asim Qureshi on the religious practices of political prisoners in Egypt and Guantanamo Bay. Her research interests include Muslim political subjectivities, carceral theology, theodicy, spirituality, and traditionalism and modernism in contemporary Islamic thought.