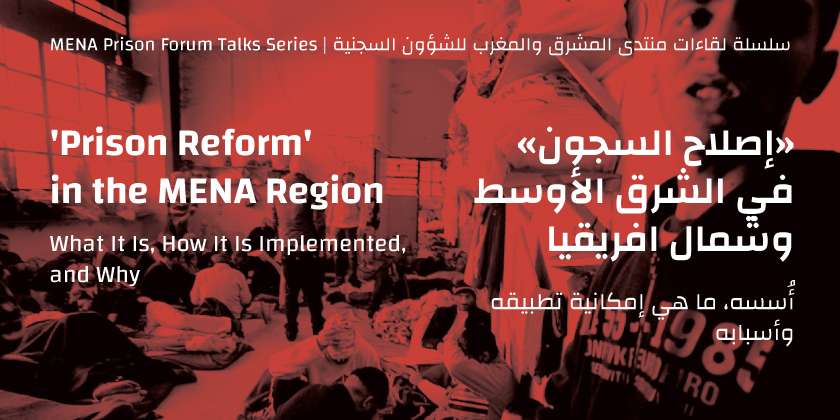 The MENA Prison Forum will speak with MPF senior researcher Kylee DiGregorio about her latest MPF Observer, “‘Prison Reform’ in the Middle East and North Africa: An International Development Project and the Means to Many Ends.” This text is the first of a two-part analysis examining prison reform across the MENA region within the framework of the international development/cooperation project model. The discussion will loosely follow the structure of Part I, which explores the historical and theoretical foundations from which donor-funded prison reform projects derive, as well as the socio-political events and shifting policy narratives from which distinct programmatic approaches have emerged. In tracing these conceptual and circumstantial underpinnings, the Observer contends that prison-focused, project-driven interventions implemented throughout the region since the early 1990s have predominantly converged around three reformist agendas: (1) rule of law, (2) human rights, and (3) preventing and countering violent extremism (P/CVE). Thus, by situating these agendas within their historical context, the discussion will set out to present a chronological overview of prison reform in the Middle East and North Africa. Through the juxtaposition of these agendas, the conversation will likewise seek to provide insights into how each respectively defines not only ‘prison reform,’ but also ‘the prison’ itself, including the roles and functions it is designed to perform and the ends it is intended to serve.

Language: The discussion will be in English with Arabic Translation.

The subsequent Q&A session will be both in Arabic and English.

Kylee DiGregorio is a senior researcher at the MENA Prison Forum, where she writes on topics of arrest, detention, torture, enforced disappearance, and extrajudicial killing in countries throughout the Middle East and North Africa. She holds an MA in International Human Rights from the University of Denver’s Josef Korbel School of International Studies and an MA in International Affairs from Columbia University’s School of International and Public Affairs (SIPA). Prior to joining the MPF, she worked as a consultant, conducting research and producing reports for several non-governmental organizations, including Human Rights Watch and Watchlist on Children and Armed Conflict.

Jad Yateem is the MENA Prison Forum Spokesperson, and the Coordinator of MPF in Lebanon. He is a Lebanese journalist with more than 20 years of work experience in research, content creation, investigative journalism, media training, and strategic communication. He has largely worked in Lebanon and Libya, and with a special focus on Syria since the uprising in 2011.