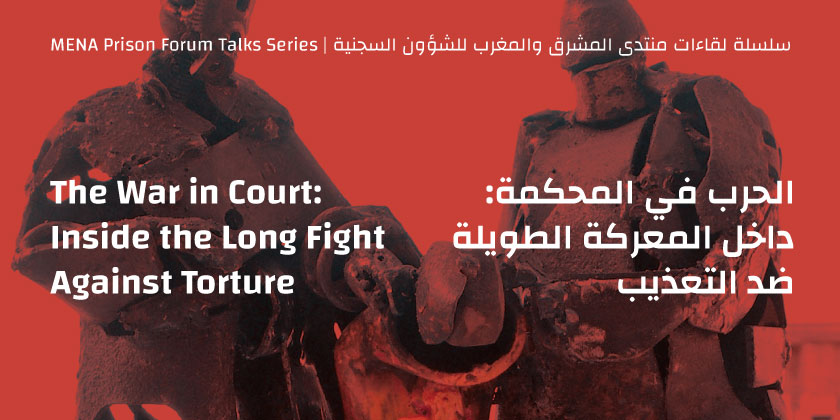 Talks: Organized by MENA Prison Forum & UMAM D&R
THE WAR IN COURT: INSIDE THE LONG FIGHT AGAINST TORTURE
A Conversation with Lisa Hajjar
Via Zoom

The MENA Prison Forum (MPF) was pleased to host a talk with renowned academic Lisa Hajjar, Professor and Chair of Sociology at the University of California – Santa Barbara. Her talk provided a unique opportunity to hear about her recently published book The War in Court: Inside the Long Fight against Torture.

Hajjar’s work over the past years has focused on issues relating to law and conflict, including military courts and occupations, torture, targeted killing, war crimes, and human rights.  Her first book explored the Israeli military court system in Gaza, her research for which uncovered how Israel relied on a large-scale control strategy of torture and forced confessions. This work led her to focus on the important role that lawyers play in the legal battle over interrogation and torture techniques, which she first addressed in the 1990s in Israel, dating back to the 1987 ruling that effectively allowed for the legalized use of torture in Israeli interrogation. Her attention shifted to the US policies in such legal developments in the War on Terror after the attacks of September 11, 2001, specifically in the ways that torture has been operationalized in the Guantanamo Bay detention camp among other detention centers and sites.

She has found in her research that understanding torture does not come from looking at those who have been tortured, but those who are doing the torture. Therefore, Hajjar’s work has focused on the steps and dynamics within the US government regarding torture. She traced how the US government used the War on Terror to expand presidential power and disregard laws of war. It also centralized the belief that interrogation and torture were the only ways to extract needed information, and in service of this belief, Guatanamo Bay was developed as a lab for developing interrogation and torture tactics. In developing this post-9/11 approach, the US maintained the importance of abiding by the law, resulting in the country’s need to pass new laws to cover their actions in the same ways that Israel has.

Hajjar dedicated a portion of her presentation to outlining the work of US lawyers in uncovering US torture tactics. She detailed specific lawyers, such as Michael Ratner and Rasool v. Bush in 2002, as well as how dynamics created pressure on the US government to disclose its secretive practices, spanning the public outcry as a result of the release of the Abu Ghraib photos in 2004, the resulting Congressional hearings that led to the release of government memos regarding their policies in detention centers, and the Supreme Court verdict of Rasul v. Bush that ruled that detainees in Guantanamo Bay could petition federal courts for habeas corpus rights. As a result of this momentum, lawyers from all sectors in the US began mobilizing to take cases from detainees held in Guantanamo Bay in 2004.

Hajjar also provided insights into the secrecy the US tried to maintain around its tactics, which it attempted to enforce by mandating all lawyers working in Guantanamo Bay to sign a protective order in which they would not disclose the treatment in the detention center. Hajjar also noted the interesting dynamic that emerged around the military lawyers who had been assigned to the cases and went against the wishes of the US administration, such as in the 2006 case of Hamdan v. Rumsfeld in which the Pentagon and Donald Rumsfeld were sued and the Supreme Court ruled that the practices undertaken by the Bush administration both were unconstitutional and violated the Geneva Conventions.

Hajjar also dedicated time to outlining the different practices of the CIA in undertaking torture and detaining individuals through black sites and other secret prisons, the existance of which ended with the Hamdan case and resulted in all prisoners being transferred to Guantanamo Bay. The challenge around detainees who were initially held by the CIA is that all information related to the CIA is considered classified, so even the detainees are not able to speak about their experiences with their lawyers. Hajjar addressed dynamics between the Bush and the Obama administration over how to manage the conviction of some of these detainees, specifically the five individuals in the 9/11 case. Another internal US dynamic was that of the relationship between the CIA and the FBI, and the FBI’s role in the torture program. Hajjar concluded that in order for there to be an actual end to the long fight against US torture, American citizens would have to recognize the full horror of policies undertaken by the US government and that the law was intentionally manipulated in order to undertake this treatment.

The discussion session afterward addressed the role of art in communicating the experiences of these detainees, including the fact Hajjar shared that the US government has claimed that the art produced by detainees in Guantanamo Bay is owned by the US government, and there have been resulting court cases over the right to have the artwork publicly displayed. The role of art is important as the most powerful legacy of Guantanamo Bay is the stories and accounts of former and present prisoners in the form of memoirs and art they have produced. She recommended the books “Guantanamo Diary” by Mohamedou Ould Slahi and “Enemy Combatant” by Moazzam Begg, as well as the films “The Mauritanian,” “The Road to Guantánamo,” and “The Report.” The conversation also addressed how the US relied on MENA countries for interrogation and torture, including Morocco and Syria in their extraordinary rendition programs of outsourcing the tactics to other governments. In this, questions around the traveling and information sharing of specific torture tactics between the US and other governments were discussed, for which the book “Torture and Democracy” by Darius Rejali gives detailed information. Further specific dynamics around the relationship between the US and MENA states were discussed, including the story of Ibn Sheikh al-Libi, a Libyan whose testimony under torture was used to argue the connection between Al-Qaeda, Iraq, and chemical weapons for the US invasion of Iraq in 2003. He spent time in Guantanamo Bay and other black sites before he was transferred back to Libya where he was seen in the infamous prison Abu Salim by Human Rights Watch researchers, where he allegedly died of suicide two weeks later. It was noted in the discussion that the MENA Prison Forum could further look into the shared dynamics and exchanges between the US and the MENA region on these practices and tactics.

Lisa Hajjar is a professor and chair of sociology at the University of California – Santa Barbara. Her work focuses on issues relating to law and conflict, including military courts and occupations, torture, targeted killing, war crimes, and human rights. Her publications include Courting Conflict: The Israeli Military Court System in the West Bank and Gaza (University of California Press, 2005), Torture: A Sociology of Violence and Human Rights (Routledge 2013), and her new book, The War in Court: Inside the Long Fight against Torture (University of California Press, 2022). She is a founding co-editor of Jadaliyya and a member of the editorial committee of Middle East Report.