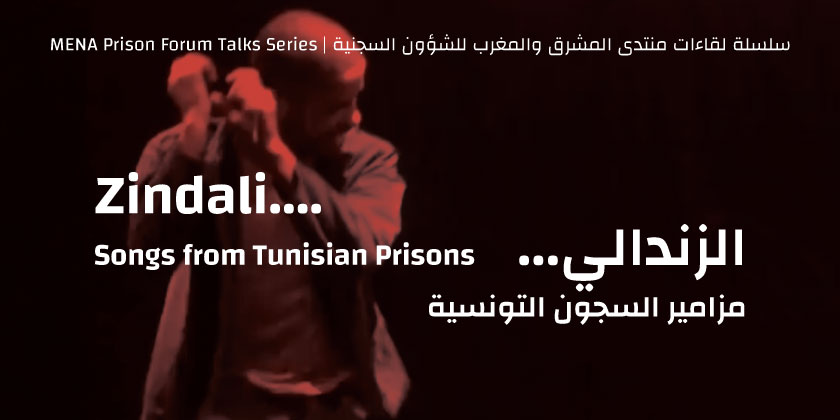 On 7 July, 2022, the MENA Prison Forum (MFP) hosted a conversation with Karim Abdessalem, a former detainee, human rights activist, and researcher, and with Dr. Mohamed Kamal Elhouki, who is also a former detainee and scholar. The conversation tackled the form of music called al-zindali that has become a popular form of expression in Tunisian prisons.

MPF Coordinator Mina Ibrahim opened the session by inquiring into the use of looking at music in prison, and if there was a risk of romanticizing prison experiences by focusing on artistic elements within carceral systems. Abdessalem took from this question a point of departure to speak about music, not as solely a form of romantic expression, but as a human expression that can showcase a whole range of human feelings, including oppression, rejection, and anger. The versatility of music as an art form is that it can be instrumentalized to capture a whole range of social expressions, and while prisoners are excluded from society by being placed in prison, they are not excluded from these human feelings nor this possibility or desire for social expressions. The use of al-zindali as an art form of expression has not only been limited just to use among prisoners, but has also been used as a tool for expressing emotions and experiences among certain sectors of Tunisia society.

Dr. Elhouki expanded on the use of music as a method to conduct research to understand social elements that may not be understandable via other methods. Looking at al-zindali, give access to a different form of informal expression and social writing of history and experiences. The art of mizwad, the larger category of music under which al-zindali falls, is an art form that is also expressed in neighbourhoods during celebrations in Tunisia, notably during celebrations for weddings and for welcoming prisoners once they are released from prison and allowed to return home. There is a dominant understanding of mizwad as a local art form and many local neighbourhoods are not aware that the music form is also practiced elsewhere. However, this type of music is largely practiced among lower socio-economic areas of Tunisia; he recounts that in the 1970s in Tunisia, cassettes of this type of music were sold similar to illicit drugs in certain marginalized neighbourhoods.

Of the different types of music that fall under mizwad, al-zindali is the type practiced in prisons; the name actually comes from the word zindala, the Turkish word for prison. The cultural and linguistic connection has transformed the word to mean the type of music, as well as the local term in Tunisian dialect to refer to the inner court of a prison, where judgements are handed down to prisoners, as well as the area of town where the Tunisian parliament is located. Historically, the music form was linked to Tunisian Jews, as historically musically was not always accepted among Muslims in Tunisia, but the Jewish community was prominently represented among Tunisian musical scenes, until other members of Tunisian society began to become involved as well. The music form has more recently been used to reject not only local society but the status quo, one which has placed them in the carceral system, and they use the form to express their protest. Some comparisons can be made between al-zindali and prisons in Tunisia, and the connection between rap and prisons in the United States: both are centered around protesting against external societal conditions, often expressing anger or frustration that is common among members of marginalized classes.

One of the defining elements of al-zindali as a genre is that the narratives or stories expressed in it have to be real-life experiences. As a result, the Tunisian state has been in opposition to this form of expression, and has taken steps to enact policies against the art form to oppress the voices of parts of society that voice resentments or frustrations with the status quo in Tunisia. Furthermore, the form of al-zindali often expresses anger or rage by trying to shock the cultural and artistic elites, and as a result the art form was forbidden in the 1970s, and all songs were banned from all media platforms. Al-zindali artists were forced to create their music in France, and share their music from abroad. However, there is one case in which an al-zindali song focused on a case of a young boy who was in prison from the perspective of his mother, expressing the immense sadness felt by the mother at her child’s incarceration. The song, which was critical of prominent statesman Mohamed Farhat, actually reached the Tunisian President Bourguiba, and he issued a presidential pardon for the boy as a result. As a result of how technology and music dissemination has changed, this type of music has now been able to become more widespread, and some songs have gone viral and become very popular. Some of the most popular ones address corruption in Tunisia within the legal system, as well as personal suffering and hardships the prisoners face.

Ibrahim then inquired into how al-zindali is studied or looked at in the wider context of the official narrative and study of Tunisian music. Abdessalem articulated that there are indeed efforts to understand and deconstruct al-zindali as an art form, but there are some challenges to categorizing it: for example, some songs that are about prison that are not technically al-zindali, but these are often grouped together with al-zindali. This comment was reminiscent of earlier conversations the MPF has had around what is considered prison literature; does it encompass all literature written in prison, and all literature written by prisoners, despite its subject? Or are there other characteristics that make the genre? There are nevertheless some academic studies that were produced and created, but he’s been focusing on trying to develop a terminology and etymology of al-zindali.

A third element that Ibrahim inquired into is the role of al-zindali among political versus “criminal” prisoners, as this division between prisoner types is another area of focus for the MPF. In response, the talk participants expressed that political prisoners in Tunisia are generally more educated and have other methods to express themselves, and in fact can take a condescending position towards al-zindali and its use among “criminal” prisoners. Therefore, while there are political elements often addressed in al-zindali songs, there is not much engagement with the art form among political prisoners in Tunisia.

The Q&A part of the talk allowed for other participants to contribute elements of their own knowledge of al-zindali as a music form, as well as suggestions for other work being done to research and analyse the form. While one of the participants referred to how political prisoners also contributed to al-zindali songs, the speakers insisted that more credit should be offered to the prisoners who do not belong to ideological and organized groups. Indeed, this debate is necessary while thinking about the controversial meanings of the “intellectual” and the “artist” and their positioning in the carceral scene in the MENA region in general.

Karim Abdessalem is a former political detainee and a researcher in the post-conflict movement of victims. He is also a human rights activist in the field of transitional justice, memory, and mechanisms of immortalization.

Dr. Mohamed Kamal Elhouki is a former political detainee and a PhD holder specialized in the enabling between religious and advocacy texts. He is also a researcher and an activist in human rights field.