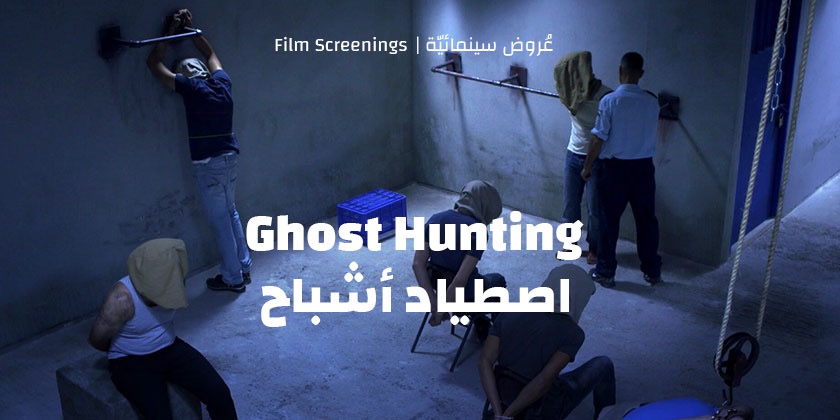 The first event of the MENA Prison Forum film screening series was held at the Graduate Institute in Geneva on May 17, 2022. The event was introduced and connected to the wider context of the on-going situation in Israel. In the previous week alone two significant events transpired: both the 74th annual commemoration of the Nakba, the “catastrophe” of the establishment of the state of Israel, the killing and subsequent attacks on the funeral of prominent Palestinian journalist Shireen Abu Aqleh, who was shot and killed by by Israeli forces in Jenin. These two events were just the most recent in a long history of violence and commemoration of the deadly and repressive measures enacted against Palestinians by Israel. The 2017 documentary “Ghost Hunting” was then screened for an in-person audience while online attendees watched the film remotely.

Upon the film’s conclusion there was a hybrid, moderated discussion with Raed Andoni, the film’s director, and Nicolas Wadimoff, the producer of the film. To kick off the discussion, Andoni and Wadimoff were asked about their experiences working on the film. Andoni spoke about his previous works, including a documentary called “Fix Me” in which he filmed himself going through psychoanalysis treatment. This process inspired him to look at the wider experience of Palestinians, specifically other Palestinians who, like him, had been imprisoned in the Israeli carceral system. He originally imagined “Ghost Hunting” to be a fictional film, for which he began to solicit other Palestinians who had been imprisoned to speak with them about their experiences, but through meeting and speaking with them the project instead transformed to a documentary following ex-prisoners re-enacting, rebuilding, and re-engaging with their shared carceral experiences.

Andoni spoke about the unique nature of working with individuals who, first, are not professional actors, and second, were not acting, but instead playing out different roles in the prison system. Andoni worked closely with a psychologist throughout the production of the film, which resulted in the stressing of the voluntary nature of the project - participants in the film could remove themselves from the project at any point - and the freedom given to the participants to decide the ways in which they expressed and engaged with their past experiences through this project. Through this, Andoni stated, the project morphed from his project into a collective, participant project. This collaborative nature was facilitate by Andoni’s own positionality, as his identity as a Palestinian who had also been in prison allowed for a different process and outcome than if the film had been made by a different director.

Wadimoff in turn spoke about his journey to focus on Palestine during the Second Intifada in the early 2000s. He then focused on the process of making “Ghost Hunting,” the element of which that struck him the most was the lightheartedness and joy he saw in the exchanges between the participants, between and after moments in which they shared moments of immense hardness and suffering. Wadimoff’s reflection on his perception of the process as an outsider to the context prompted Raed to share an unforeseen dynamic that emerged through the filming process: while Andoni had been concerned throughout the filming of the possible retraumatization and negative emotional impact the process could have on the Palestinians involved in the project, he had neglected to consider the impact of the project on others involved. This came to light through the project’s Swiss director of photography, who one day had an emotional breakdown as a result of experiences the participants were sharing and the themes of torture, suffering, and abuse the film was addressed. Andoni then further spoke about the connection formed between the participants in the film, comparing the experience the men went through to the same connection and camaraderie building impact actual incarceration can have on individuals. He described the emotional and stressful experience of screening the film for the first time in Ramallah for the participants and their families.

In the Q&A session, a question was asked about the connection between the film and the seeking of justice. Andoni answered that while film, as well as other elements of culture and art, can help individuals and collectives persevere in the face of injustice, it will be through other means that the injustice of the Israeli occupation will end. Wadimoff agreed, pointing to the example of Abu Aqla’s recent assassination and how even with an abudance of filmed and documented elements, these materaisl in itself will not provide justice for her killing. Another question from the audience noted that there were not main characters in the film, but instead the focus was on the group process itself, and inquired into the motivations behind this decision. Andoni replied by stating he enjoyed working with the limitations imposed by the project: the limitations of both filming only in a singular space and of focusing on a group and its dynamics. Through these limitations, he wanted to show how collective identity can develop under these conditions in Palestine and between different people, despite their unique personalities and backgrounds, when collectively incarcerated in Israeli prisons. In response to a question about the role and use of the animated elements in the film, Andoni spoke of using these tools to show his subconscious throughout the process, also building off the shared experience of one of the ex-prisoners of his mother coming to him in a vision while he was in prison. The conversation ended with an idea for further collaboration, as Andoni and Wadimoff expressed interest in and the possibility of transforming “Ghost Hunting” into a theater performance, as the idea of bringing the documentary to a physical stage could be a natural next step of the project.