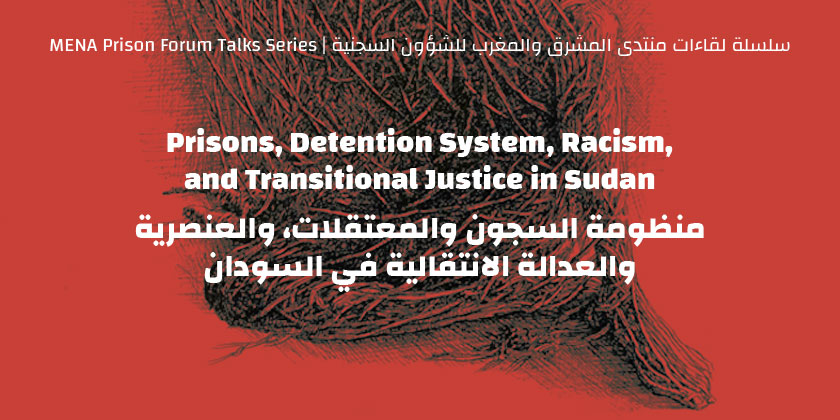 On May 26, 2022, the MENA Prison Forum was pleased to host an interactive conversation on the prison and detention system in Sudan between writer, journalist and feminist activist Wini Omer, and development consultant and human rights activist Magdi El Na’im. The conversation was moderated by policy and social development researcher Marwan Abi Samra. The session discussed the prison and detention system set up by the regime of Omar al-Bashir and his National Congress Party (NCP) following the 1989 coup in Sudan. The session specifically highlighted the establishment of unofficial and secret prisons, the “privatization” of prisons and detention centers, and the multiple levels of repression and human rights violations in prisons: ranging from repression and violations against political opponents, to racist violence against different ethnic groups, to violations against women.

Abi Samra, who has worked for many years on and in Sudan as a social policy consultant, provided an overview of the context in which the MPF had organized this talk, the first in a series of two talks focusing on Sudan. The series was planned in light of the 2018-2019 Sudanese revolution that overthrew former president, Omar al-Bashir, after 30 years in power. It had become clear during the revolution that human rights and the building of democratic institutions were vital concerns among Sudanese, and a central site of these concerns focuses on the nature of the detention system in Sudan. He then spoke about three core characteristics of Omar al-Bashir’s regime that determined the nature of human rights violations in the country: authoritarian militarism, Islamism, and racist Arabism. In addition to the violent authoritarian and repressive nature of al-Bashir’s rule, the regime also took violent Islamization and Arabization campaigns throughout its three decades of rule. In this context, the al-Bashir regime had been using the carceral system as part of the efforts to consolidate the grip of Islamists on the country and its population, especially its female population, as a tool of authoritarian, religious, and racist violence and discrimination.

The floor was then handed over to Omer and El Na’im, with Abi Samra offering questions for reflection and discussion. El Na’im spoke about the weakness of the Sudanese state when it was taken over by al-Bashir and his security services in June 1989. The priority of the regime was to take and retain control of the state, and to do so they developed a fragmented and privatized security force that used torture as a core tool of control, and that exists in the shadow of internationally recognized prisons such as Cooper prison in Khartoum. Omer continued, stating that in the two years since the transitional government came into power in Sudan, the issue of detention and carcerality has not been addressed.

In regards to the dynamics between the regime’s Islamist nature and its human rights abuses, under al-Bashir several religious decrees were passed legitimizing the use of torture in racist, discriminatory practices in the Nuba mountains based on civilian populations being accused of being “unbelievers” in an exploitation of Islamist ideology. Additionally, the justice system had been purged of professional and qualified individuals, and replaced with members of the Islamist movement, resulting in a reformed penal code in the country that criminalized specific groups and limited individual freedoms and liberties. The speakers noted that the pervasive racial element in carceral and political violence in Sudan was most notably seen in the practices of detention, violence, and rape in wars fought in the Darfur region of the country. In turn, the practices of gendered violence in Sudan are also rooted in the ideological approach of the Islamist regime that criminalized women’s attempts to exercise their rights, including elements of women’s dress in the criminal code and punitive laws toward women who seek justice for rape.

Omer noted that under this Islamist, military regime of al-Bashir, the system relied on security agents trained in different countries in the region and they recruited large numbers of civilians to monitor neighborhoods to enforce practices and behavior. Seventy percent of the government budget was set aside for the security apparatus, including these “popular security” agents. The fragmentation of the security system in Sudan meant that there were several alternative institutions and bodies undertaking state violence, in which the use of torture was continually central.

The use of secret prisons has also been rampant in Sudan, which al-Bashir’s regime used to deny the existence of in claims that the accusations were leveled at the regime to tarnish its reputation. These secret detention centers, also called “houses of ghosts” due to their clandestine nature, obscure all indication of their existence save for the voices and sounds coming from the detainees. The secretive nature of these prisons rendered them outside of any legal framework.  These secret sites were largely used to imprison activists and political detainees; interestingly, more prominent political activists were not detained via these methods, but instead had to be arrested according to legal frameworks, while lesser-known activists were subjected to widespread, secretive, and illegal campaigns. Testimonies of individuals who were incarcerated in such locations who have survived describe extensive torture in these sites, with many detainees being killed within months, and those who survived have long-term effects of the torture and treatment in these secret prisons. There was some resistance to and reforms of these secret practices, and there was hope for modified practices back in 2010, but instead such practices were restricted in scale but not in nature.

Speaking about wider-spread practices in Sudanese prisons, the speakers noted that there is also evidence of the use of forced labor in prisons in Sudan, with examples of political prisoners being forced to manufacture bricks in prisons in Khartoum. Additionally, attempts to circumvent international monitoring took the form of prisoners being moved from prisons ahead of UN expert visits, obscuring the extent of prison conditions and practices.

In the Q&A session, the participants shared their concern about the absence of documentation of human rights abuses that unfortunately has continued following the 2019 uprisings and the removal of Omar al-Bashir’s regime. They also insisted that a credible process of transitional justice should address the carceral scene and its crimes. In this regard, Wini Omer emphasized that formal addressing and dismissal of the country’s infamous heritage could help to define the ongoing presence of violations, especially in the aftermath of the recent 2021 military coup. In the same vein, El Na’im focused on how the reliance on security solutions to solve racial violence, namely in Darfur, instead of investigating the political reasons for these tensions, has and will continue to further divisions in the Sudanese society.

Wini Omer is a Sudanese writer, journalist, and feminist activist. She has a Bachelor’s degree in Sociology and Anthropology and a Master’s degree in human rights. She has been working for the past ten years as part of the Sudanese civil society, and her work and activism focuses on women's protection, feminist epistemology, social movements and state violence. She is a member of the Protecting the Right to Life Campaign, a group from Sudan that works on ending political violence and state violence. Her work as a researcher focuses on feminist epistemology, she is currently researching women and history in Sudan.

Magdi El-Naim is a Sudanese human rights and development consultant and activist with over 20 years of experience. He has held senior roles with national, regional, and international NGOs including Sudan Human Rights Monitor (SHRM), Cairo Institute for Human Rights Studies, and International Center for Transitional Justice. He also contributed to publications in the fields of development, human rights and development, Islam, and Sudanese and African studies.