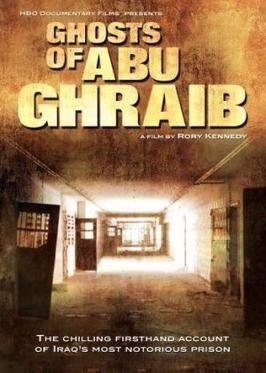 The release of disturbing pictures of torture at Iraq's Abu Ghraib prison raised many troubling questions: How did torture become an accepted practice at Abu Ghraib? Did U.S. government policies make it possible? How much damage has the aftermath of Abu Ghraib had on America's credibility as a defender of freedom and human rights around the world?
Acclaimed filmmaker Rory Kennedy looks beyond the headlines to investigate the psychological and political context in which torture occurred in the powerful documentary Ghosts of Abu Ghraib.

For the first time, Ghosts of Abu Ghraib features both the voices of Iraqi victims (interviewed in Turkey after arduous attempts to meet with them) and guards directly involved in torture at the prison. Conducted by Kennedy, these remarkably candid, in-depth interviews shed light on the abuses in an unprecedented manner. Through these interviews, the film traces the events and the political and legal precedents that led to the scandal, beginning with the attacks on the World Trade Center and the Pentagon on Sept. 11, 2001. Ghosts of Abu Ghraib strongly suggests that, far from being an unauthorized, isolated event by rank-and-file soldiers acting on their own initiative, the physical and psychological torture employed at the prison was an inevitable outgrowth of military and government policies that were implemented in a climate of fear and chaos, inadequate training and insufficient resources.

The interviews with soldiers who took part in and observed the torture at Abu Ghraib show them to be intelligent and articulate young men and women, not gun-happy, sadistic torturers - challenging what viewers may think they know about what took place at the prison. For the most part, soldiers stationed at Abu Ghraib were not trained as prison guards, yet as few as 300 of them were put in charge of up to 6,000 prisoners, who were held in squalid and dangerous conditions.

After numerous investigations, 11 low-ranking MPs and Military Intelligence corpsmen were court-martialed. Only one high-ranking officer has been penalized to date: Brigadier General Janis Karpinski was demoted to colonel and has since retired from the military. At the same time, other high-ranking officials associated with the scandal have been promoted and the chain of command has not been subject to an independent investigation.

Ultimately, the film raises serious questions about what happened, why it happened and wh,ether it was an isolated incident, as the government continues to maintain. Using footage from famous obedience experiments performed at Yale by eminent social psychologist Stanley Milgram in the 1960s, the film suggests that under orders most people are capable of perpetrating inhumane and unjust acts against others.