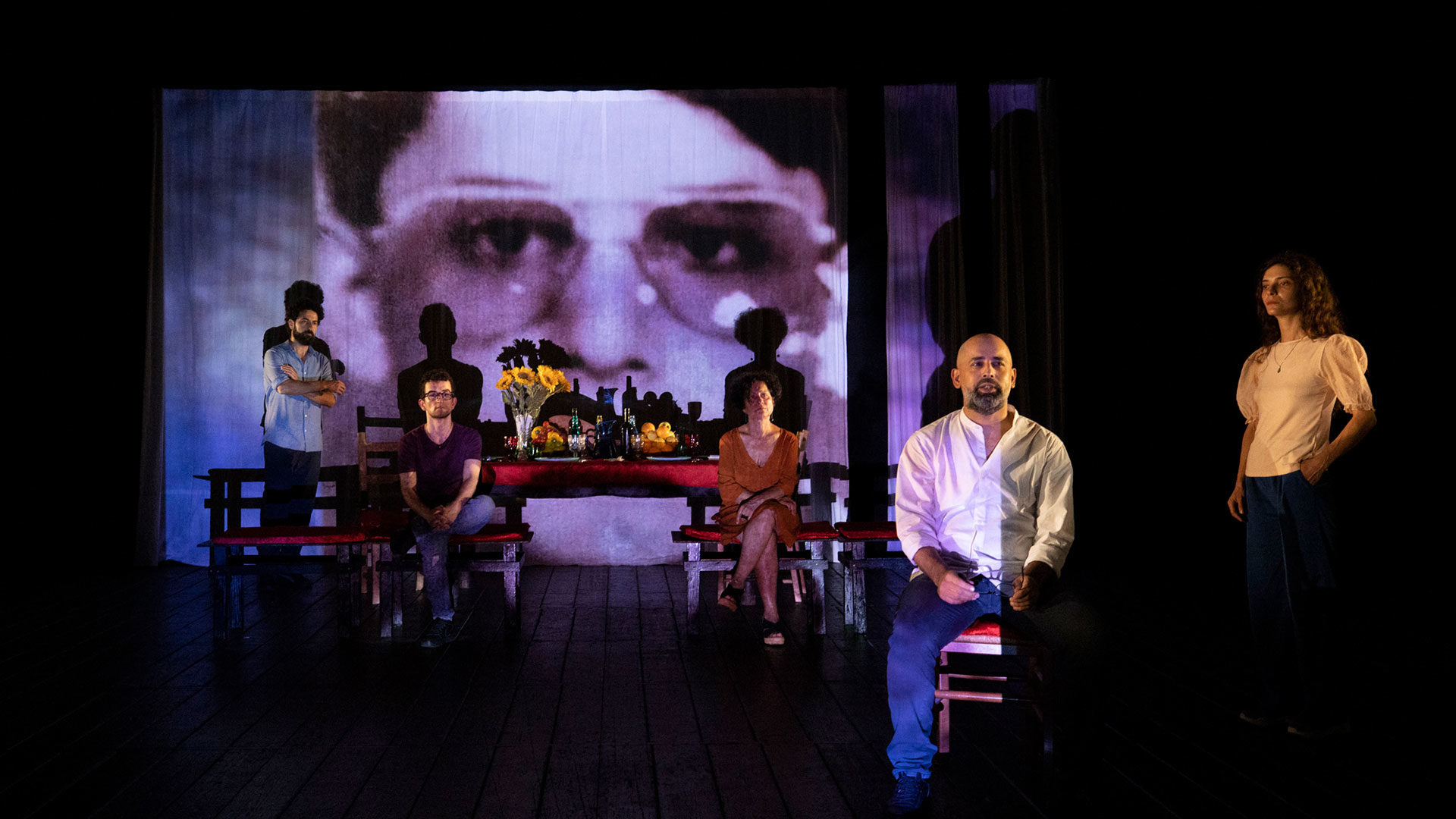 Photo via Salvatore Pastore at BONLIEU SCÈNE NATIONALE ANNECY
Y-SAIDNAYA
By Ramzi Choukair
ARBITRARY DETENTION
FEMALE DETAINEES
LIFE IN PRISON
POLITICAL DETAINEES
SAYDNAYA PRISON
SEXUAL ABUSE
SOLITARY CONFINEMENT
SYRIA
TORTURE
TORTURE SURVIVORS
TRAUMA
Synopsis
About the Artist
Y-Saidnaya proceeds from Ramzi Choukair's X-Adra (2017), and is conceptualized and situated as the second installment of a trilogy that honors the Syrian Revolution, and—more specifically—all those whom the regime forcibly deprived of freedom in the years before and after its inception in March 2011. The piece emulates X-Adra's structure, assuming a stylistic framework known as a "polyphonic story" that is comprised of a mosaic of interlaced and overlapping anecdotes and vignettes that recount the personal experience of six individuals formerly detained by the regimes of Bashar al-Assad and, before him, his father and predecessor, Hafez al-Assad.

The piece takes its name from Saidnaya Military Prison, which in 2017 Amnesty International deemed a "human slaughterhouse." According to an investigation conducted by the human rights organization, as many as 13,000 people were secretly, extrajudicially executed in Saidnaya between September 2011 and December 2015, and subsequently buried in mass graves. Yet even prior to the onset of the revolution, Saidnaya was, among many Syrians, a byword for inexorable torture; deplorable, inhumane conditions; starvation; and punitive medical neglect. Many analysts, observers, activists, and former detainees note that Saidnaya prison is to Bashar al-Assad what the notorious Tadmor prison was to Hafez al-Assad: in the words of poet, writer, and former political prisoner Faraj Bayraqdār, the "kingdom of madness and death."

The content of Choukair's Y-Saidnaya is, however, engaged with—and fully engrossed by—the living. His stage serves as a platform from which formerly imprisoned individuals give testimony, and through which a global audience can bear witness. Riyad Avlar, for example, traveled from Turkey to Syria in 1996 at the age of twenty-two to study Arabic. Upon his arrival, however, he was arrested and detained by the intelligence services of Hafez al-Assad on accusations of espionage. Twenty-one years would elapse before his release. The harrowing details of Riyad's account blend into that of Shevan Ven der Lugt, a young Syrian activist of both Armenian and Jewish origins who was arrested and imprisoned for participating in peaceful demonstrations in support of the 2011 revolution. Hend Alkahwaji—who also shares elements of her experience in X-Adra—was arrested by Hafez al-Assad's mukhabarat (secret service) in 1982 for distributing leaflets that called for the Syrian army's withdrawal from Lebanon.

The series of accounts divulged by the "protagonists" reject temporal linearity, darting forward multiple decades only to flash back once more to the 1980s. This renunciation of chronological sequence embodies the words of poet, activist, and former political prisoner Hasiba 'Abd al-Rahman, "evok[ing] place that is no-place and time that is no-time." Such a state becomes the prisoner’s reality, deliberately manufactured by his or her jailers to produce spatial and temporal disorientation. As scholar Miriam Cooke has eloquently written, "[i]n the cell, . . . [t]ime is both empty, without beginning or end, and full of stops and starts."

Yet this disjointed, unpredictable, and at times, erratic telling of events is perhaps also intended to mirror and thereby magnify the arbitrary, indiscriminate, and often haphazard nature of arrest and imprisonment that has for decades characterized the Assad regime and its network of intelligence and security services. This carceral dragnet has and continues to swallow individuals of all political, religious, and intellectual persuasions—raising complexities and nuances with which Choukair engages meaningfully and adroitly. In so doing, he challenges the largely sectarian, frequently polarizing oversimplifications and generalizations that are regularly indulged and circulated, not least by the Assad regime itself. Y-Saidnaya reveals glimpses into the horrific ordeals of individuals arrested on overtly "political" grounds, but also casts a light on those detained for their work as artists, including musician Saleh Katbeh, actor Jamal Chkair, and Kinshasa-born, Lebanese director Alaa Mansour.

Hailing from different countries and creeds, professions and politics, the common denominator that links Riyad, Shevan, Hend, Saleh, Jamal, and Alaa is their shared experience of detention inside the carceral matrix of the Assads' Syria. By choosing to collectively retrace their painful trajectories and exchange their haunting memories, these six men and women undertake a critical practice of examination and analysis—one marked by the reconstitution of events and situations, and the comparison and juxtaposition of circumstances.

The result is a kind of map, which outlines the contextual shifts and sketches the enduring contours of an authoritarian landscape that stretches more than five decades. The compilation of monologues that merge and converge to constitute Y-Saidnaya thus seeks to identify the regime's mechanisms of repression and determine its levers of control. To chart a course forward, one must first know where she is, and understand where she has been. Y-Saidnaya contributes volumes to this knowing, as it works to formulate a blueprint of the Assad family's autocratic architecture in order to ascertain the most effective means by which to facilitate it’s dismantling. Borrowing the words of prolific writer, poet, and playwright Mamdouh Adwan, Y-Saidnaya—and these six individuals who passed through Saidnaya’s cells—also, in the process, "remind us of our lost humanity."
Ramzi Choukair (b. 1971 in Beirut, Lebanon) is a Syrian-French actor and theater director. Dividing his time between Syria and France for a period of ten years, Choukair served as the director of technical and artistic performance at the Damascus Opera for Culture and Arts in 2003-2004, and in 2008, he became the technical director of the Damascus Arab Capital of Culture. In November 2010, a work project compelled him to leave Damascus for what was originally intended to be only a few months. In light of the Assad regime’s swift and violent response to the onset of mass demonstrations in March 2011, however, Choukair did not return. Instead, he contributed to the revolutionary cause from France, where he organized solidarity rallies, drafted press releases, and composed and distributed petitions addressed to diplomats and officials within the French government.

Four years would pass before the idea of X-Adra materialized, spurred by a chance encounter in Turkey with a woman named Mariam—the last among the six individuals to share her personal testimony on stage. Shaken by her story, Choukair subsequently decided to travel to three cities in southern Turkey to meet with others formerly detained in Syria. As he later recalled, all those with whom he met planned their return after the war and "the fall of dictatorships—political or religious, formerly or newly in place." He then reached out to a constellation of NGOs, which in turn put him in contact with Syrian asylum seekers in Istanbul, Berlin, Paris, and Madrid.

Proposing his outline for the piece, Choukair was, from the outset, resolute in that the work's authors would also be its actors. In February 2017, he convened a four-week workshop—the first occasion in which Ayat, Hend, Mariam, Rowaida, Kenda, and Ali, as well as Lubana, all came together in the same place at the same time. Throughout this period, the raw testimonies of the "protagonists" were crafted into the text that is now X-Adra. The piece is the first of a trilogy, and is followed by the production titled Y-Saidnaya. Choukair is currently in the process of creating the final part of this series, which honors the Syrian Revolution and the courageous, often life-threatening efforts Syrians made to propel their country forward on the path to freedom. He is based in Marseille, France.
Previous
SHARE