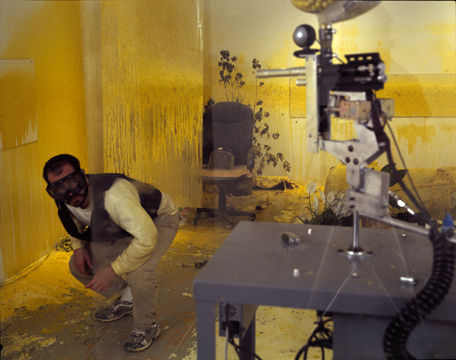 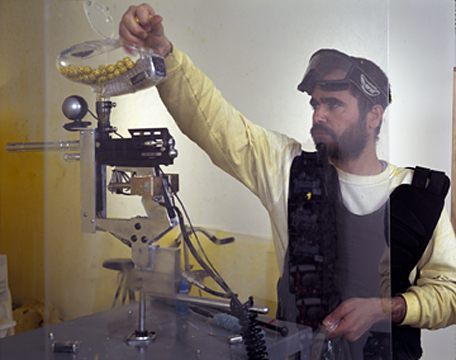 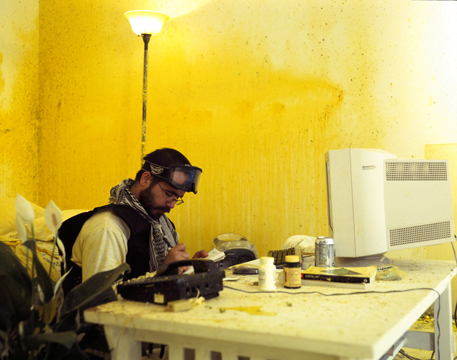 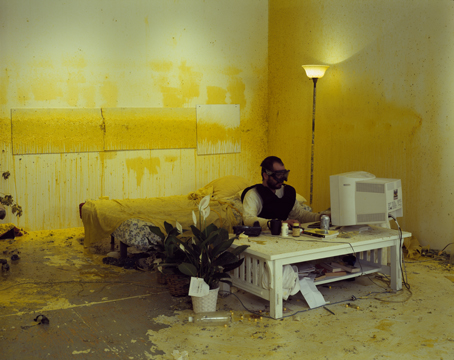 Images via the artist at WAFAA BILAL

To carry out this durational "performance," Iraqi-American artist Wafaa Bilal lived in self-imposed confinement in a prison cell-sized area of Chicago's Flatfile Gallery for 30 days. Broadcast via live webcam, the exhibition granted viewers 24-hour virtual access to Bilal's confinement space. Visitors to the project's website could not only watch and communicate with the artist in a chat room; they were also afforded the ability to shoot at him using a remote-controlled paintball gun—transforming the virtual experience into a physical one, albeit for Bilal alone. Although a prominent objective of the exhibition was to scrutinize the gamification of violence, the artist deliberately chose to distinguish the interactive experience from that of violent video games in one critical way: those who decided to shoot at him were unable—by design—to hear the shot or its impact. The absence of sound in the installation served to emulate remote, technological warfare, underscoring the fact that state actors currently responsible for launching military attacks and waging wars are often doing so from afar.

A critical commentary on modern technological warfare and its far-reaching implications, Domestic Tension also sought to provide just the slightest glimpse into life in a conflict zone. The exhibition aimed to raise awareness of the lived experience of Iraqi people in particular— characterized by arrested movement, constant fear of bombardment, and, as Bilal describes, both the violent and the virtual war they face on a daily basis.

Wafaa Bilal (b. 1966 in Najaf, Iraq) is an Iraqi-American artist known internationally for his provocative interactive video installations. While still a university student, he was arrested and tortured for his art, which was critical of Saddam Hussein's rule. Upon his release, Bilal became involved in mobilizing opposition against the government, until he was forced to flee to Kuwait after refusing to participate in Iraq's 1990 invasion of the country. He subsequently found himself in a refugee camp in Saudi Arabia, where he spent two years teaching art classes and providing art therapy to children.

Bilal has lived in exile in the United States since late 1992, and his work, as he says, explores [the] tensions between . . . his home in the comfort zone of the US and his consciousness in the conflict zone in Iraq.

The idea for Domestic Tension was largely inspired by the death of his 21-year-old brother, who was killed by American fire as he stepped out of his home in Najaf in 2005. Bilal is currently based in New York City.