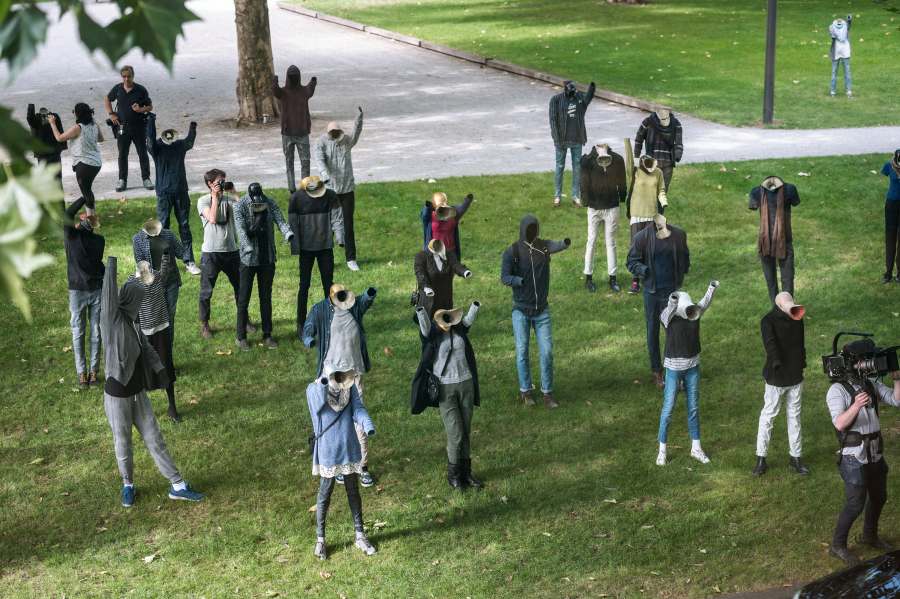 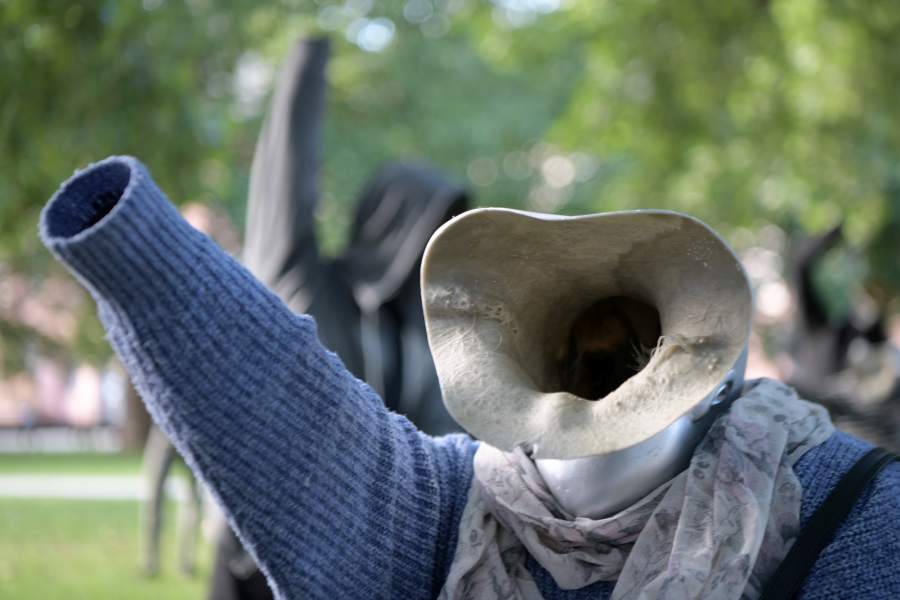 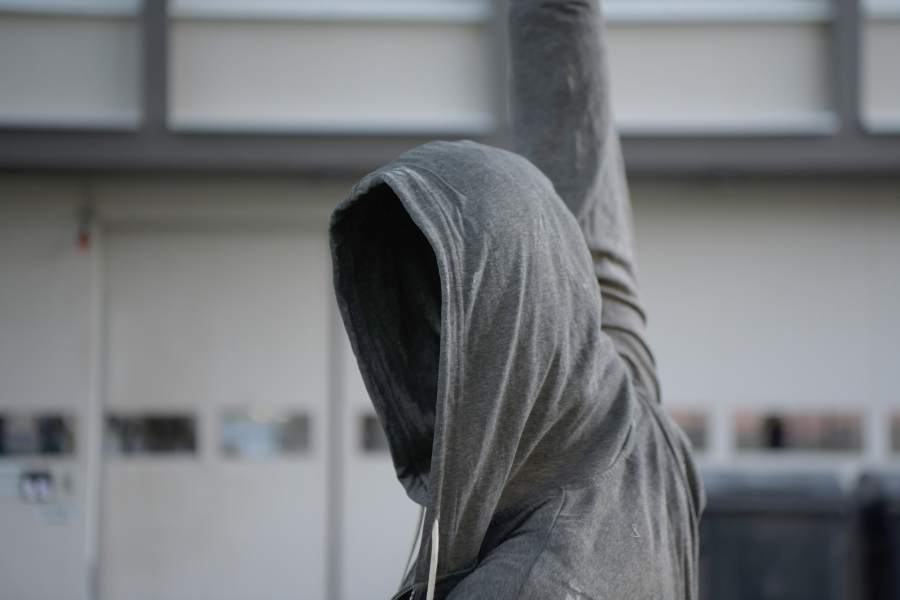 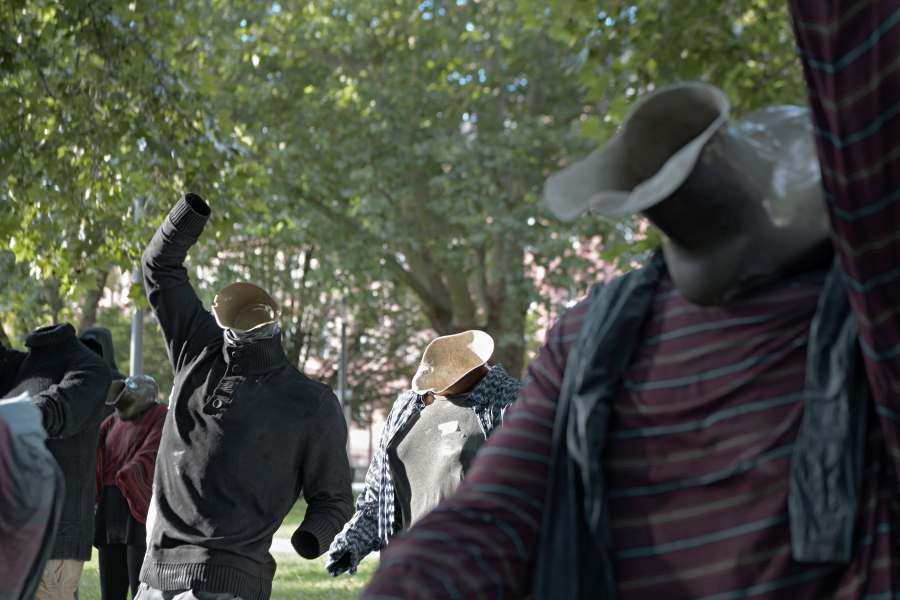 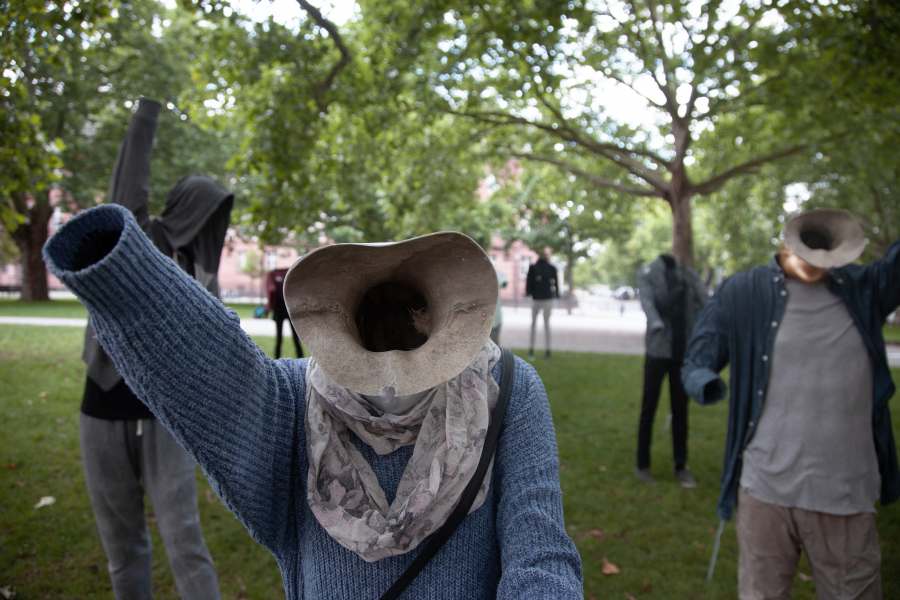 Forty-nine figures stand on the lawn of the Higher Regional Court in Koblenz, Germany—where two former officials of the Syrian government’s security services are currently being tried for crimes against humanity. The trial—which began on April 23, 2020—is unprecedented, as it is the first in the world to address state-sanctioned torture in Syria. Despite the significance of these court proceedings, however, measures to contain the spread of COVID-19 have prevented the families of Syrian victims and detainees from attending.

The mannequin figures occupying the Court’s premises—wearing the clothes of artists and activists of the Syrian diaspora—bore witness in their place. Comprising what Khaled Barakeh calls "The Muted Demonstration," these faceless figures were exhibited on July 1 – 2, 2020 in full view of the courtroom windows, their arms raised in poses reminiscent of the peaceful protesters who filled the streets of Damascus in early 2011. They represent and honor both the survivors of Syrian regime abuses as well as the deceased, thereby personifying all those who were absent from the court sessions, whether because of pandemic-related restrictions, ongoing detention, disappearance, or death. In this way, Barakeh explained, the installation acted as both a re-creation and a continuation of "the work of . . . amazing activists who risked or lost their lives."

"I wanted Syria's war criminals to know that survivors of detention and human rights activists are watching," despite their physical absence, Barakeh said. According to the artist, the policies implemented to contain COVID-19—including curfews and restrictions on movement and social gatherings—have been a "vivid reminder" of the conditions under which Syrians lived following the start of the popular uprising nine years ago. Yet in spite of current constraints and regulations, the artwork, Barakeh asserted, "intends to bring our voices to the perpetrators who once tried to mute [us]."

Khaled Barakeh (b. 1976 in Damascus, Syria) is a conceptual artist and cultural activist. Approaching art as a vehicle of social change as well as cultural preservation, his work often explores and challenges structures of power against the backdrop of history and identity. Based in Berlin, Barakeh is the creator of the Syrian Biennale—the first mobile exhibition to trace the path of the Syrian diaspora, the so-called "refugee route."