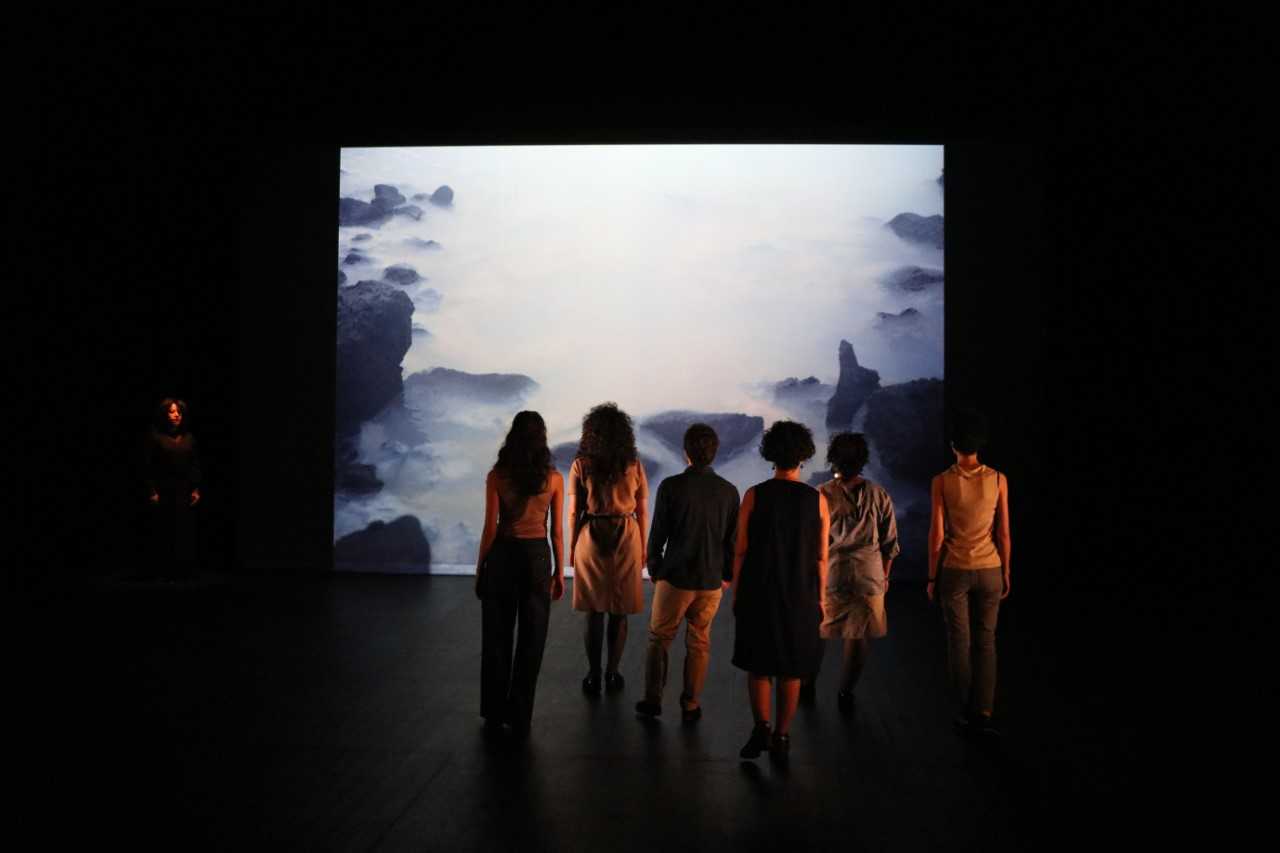 Photo via Ahmed Naji
X-ADRA
By Ramzi Choukair
WORK LINK
ADRA PRISON
FEMALE DETAINEES
LIFE IN PRISON
POLICE BRUTALITY
POLITICAL DETAINEES
SEXUAL ABUSE
SYRIA
TORTURE
TORTURE SURVIVORS
TRAUMA
Synopsis
About the Artist
In the Media
Adopting the structure of what its creators call a “polyphonic story,” X-Adra constitutes—perhaps unintentionally—an oral narration of Syria’s recent past and ongoing present. It cannot be readily conceived of as a “performance,” but rather, embodies a reconceptualization of the country’s modern historical record—a retelling ushered onto the stage of collective consciousness by six Syrians whose lives Syria’s tragic trajectory has forever reconfigured. Formerly detained within the sprawling labyrinth of prisons and security branches administered under the regime of Bashar al-Assad, and previously that of his father, Hafez al-Assad, five women and one man recount their intimately personal experiences in state custody. In their willingness to bare segments of their respective stories, Ayat Ahmad, Hend Alkahwaji, Mariam Hayed, Rowaida Kanaan, Kenda Zaour, and Ali Hamidi volunteer as mediators and interpreters to translate to a global audience their own individual notions and definitions of what it means to be imprisoned.

Their monologues are seamlessly interlaced, threading in and out, and back and forth between one another in a rhythmic reciprocity that weaves a strikingly coherent, heart-wrenching tapestry of pain and loss, but equally, of the human spirit’s boundless capacity for connection, adaptation, and quiet, steady persistence. One testimony pauses to shepherd in another, only to later resume from a point at which the accounts of the two former strangers once again converge with poignant fluidity. Collapsing and transcending timelines, the encapsulating “story” that emerges from these six “vignettes” is not merely one of imprisonment in its conventional sense; what crystallizes around these snapshots of carceral experience is a view more panoramic in scope, which brings into focus a concept previously referred to as the “giant prison”—what Syrian writer, intellectual, and former political prisoner Yassin al-Haj Saleh has, in the Syrian context, termed the “greater jail.” As Saleh eloquently notes, the perimeters of this “greater jail” trace the borders of Assad’s Syria itself, inside which imprisonment is “the rule, the general law under which the entire population lives.” The dramaturge of X-Adra, Syrian author, playwright, dramatist, and cultural activist Wael Kadour, also alludes to this metaphor. In the program of the piece, Kadour writes that it’s composition and representation were devised in a manner that scrutinizes the “type of prison” in which Syrians have lived “over the past decades.”

X-Adra—which borrows its name from one of Syria’s most notorious women’s prisons—examines the meaning of imprisonment first and foremost through the lens of gender and sex. With a dignified and simple candor, the “protagonists” attest to the realities of sexual and gender-based violence inside places of detention, but also expose the prevalence of more culturally taboo—and thus less acknowledged—practices of gendered discrimination and subjugation, including forced marriage and marital rape. These modes and facets of “domestic imprisonment”—a categorically gendered variant of “house arrest”—play a secondary, but nonetheless critical role in X-Adra, as these are the underlying narrative currents on which each “storyline” unfolds and progresses, carried forward until it merges into the next. Such iterations of individual suppression and constraint, though ancillary, give contour and shape to the primary subject: life inside the Syrian carceral apparatus. Perhaps this dramaturgical format is intended to imitate the hierarchical structures of power, authority, and control that are not only preserved within despotic regimes, but also mirrored and reproduced by the patriarchal and paternalistic societies over which they frequently rule. Reflecting upon the early days of the Syrian uprising and the inspiration for the piece, director Ramzi Choukair recalled a conversation with his sister, in which she told him that the task of those demonstrating was “not only to bring down the dictator who is at the head of the country, [but] also to bring down every dictator in every house in Syria.”

If the skeletal structure of X-Adra is fashioned from personal encounters with, and incidents of, gendered systems of restraint, however, the heart of this piece lies in an unyielding commitment to, and an unabashed pursuit of, freedom in all of its forms. Ayat, Hend, Mariam, Rowaida, Kenda, and Ali were, after all, each arrested and detained on separate occasions for their peaceful efforts to counter the regime’s myriad manifestations of repression. In 1982, for example, Hend was arrested by Hafez al-Assad’s intelligence services after distributing leaflets calling for the Syrian army’s withdrawal from Lebanon. Thirty years later, in November 2012, Kenda was detained by the intelligence services of Bashar al-Assad for her participation in a four-person protest demanding the release of tens of hundreds of unarmed demonstrators whom had been swallowed up by the state’s omnipresent carceral machinery. Dressed in wedding gowns, the women held up signs and banners on which they had written: “Syria is for all of us. Civil society demands the cessation of all military operations in Syria.”

On a darkened stage, purposefully shrouded in shadow, these six individuals highlight the contrast and contradiction through which their personal histories are etched. In one breath, Ayat tells of how she was beaten by her family and forced to marry her cousin to cover the “scandal” of her first arrest in 2009; in the next, she describes the night that she watched in helpless horror as a prison guard raped her friend and cellmate, Manal. Though the common denominator from which X-Adra emanates is one of oppressive abuse and imprisonment, it is also one of personal agency and integrity, and an indelible conviction in liberty. The crime to which Ayat bore witness that New Year’s Eve night occurred following her second arrest—which itself transpired in 2012, after she made the decision to leave the marriage that had been imposed upon her, and to take part in the non-violent protest movement then sweeping the country.

Together, the testimonies vocalized by these six individuals resuscitate the adage that is—in some cultural contexts—often dismissed as cliché: the value of a thing is fully recognized only once one is confronted with its absence. As a transgender man who performed his gender affirming surgery in exile in Berlin, Ali’s account centers upon a letter that he wrote to his mother while in prison, in which he disclosed to her for the first time that he identified not as a woman (previously Ola), but as a man. He wrote: “[Prison] teaches what a person is and what a person wants to be,” and it also teaches that “nothing is worth freedom.”

In his unsent letter, Ali also pronounced the death of his former identity—the person who had entered prison. “Ola the girl,” he vowed, “her life ended and [she] will never see the outside world.” To varying degrees, this perhaps resonates with all those formerly detained inside Assad’s prisons, which systematically employ techniques designed to precipitate the corrosion of the human will, the degradation of the conscience, and the dissolution of spirit, as if the very purpose of imprisonment is to extract from the physical vessel its humanity. After surviving such torment, it is impossible to revert to the person one was prior to being detained. Perhaps this is what is meant in the closing lines of X-Adra, when opera and lyrical singer Lubana Al Quntar, assuming the role of an unknown prisoner, confides: “I want to look at my face in the mirror and not know who it belongs to.”

The wish to dissociate from oneself, of course, derives from the impossibility of disconnecting oneself from prison, or—perhaps more precisely—dislodging prison from oneself. Speaking from an unspecified place of detention, Ms. Al Quntar continues: “When I leave here I will remain here. I will take my prison with me wherever I go.”

X-Adra thus casts a distinctive light on the intricacies and nuances of memory. Indeed, the production’s very existence exemplifies in physical form the tensions and sacrifices that are intrinsic to memory and memorialization: Is memory the price of freedom? To what extent are memory and freedom mutually exclusive? In other words, to what degree is memory itself a prison for those granted no choice but to remember? Is memorialization a form of self-imposed imprisonment, or a mode of resistance and a revolutionary act in itself? As Mr. Kadour has articulately asked: How can Syrians “free themselves” and “go on living” while “preserving Syria’s memory?”

Among the most constructive faculties of memory is the prevention of the recurrence of atrocity. The practice of memory and the act of memorialization, therefore, not only function to bear witness, but also to cultivate consciousness.

“Maybe no one can completely leave prison,” Ms. Al Quntar ruminates in X-Adra’s final moments. “Unless they can come back to it and open the cells to fill them with sun and air.”
Ramzi Choukair (b. 1971 in Beirut, Lebanon) is a Syrian-French actor and theater director. Dividing his time between Syria and France for a period of ten years, Choukair served as the director of technical and artistic performance at the Damascus Opera for Culture and Arts in 2003-2004, and in 2008, he became the technical director of the Damascus Arab Capital of Culture. In November 2010, a work project compelled him to leave Damascus for what was originally intended to be only a few months. In light of the Assad regime’s swift and violent response to the onset of mass demonstrations in March 2011, however, Choukair did not return. Instead, he contributed to the revolutionary cause from France, where he organized solidarity rallies, drafted press releases, and composed and distributed petitions addressed to diplomats and officials within the French government.

Four years would pass before the idea of X-Adra materialized, spurred by a chance encounter in Turkey with a woman named Mariam—the last among the six individuals to share her personal testimony on stage. Shaken by her story, Choukair subsequently decided to travel to three cities in southern Turkey to meet with others formerly detained in Syria. As he later recalled, all those with whom he met planned their return after the war and “the fall of dictatorships—political or religious, formerly or newly in place.” He then reached out to a constellation of NGOs, which in turn put him in contact with Syrian asylum seekers in Istanbul, Berlin, Paris, and Madrid.

Proposing his outline for the piece, Choukair was, from the outset, resolute in that the work’s authors would also be its actors. In February 2017, he convened a four-week workshop—the first occasion in which Ayat, Hend, Mariam, Rowaida, Kenda, and Ali, as well as Lubana, all came together in the same place at the same time. Throughout this period, the raw testimonies of the “protagonists” were crafted into the text that is now X-Adra. The piece is the first of a trilogy, and is followed by a production titled Y-Saidnaya. Choukair is currently in the process of creating the final part of this series, which honors the Syrian Revolution and the courageous, often life-threatening efforts Syrians made to propel their country forward on the path to freedom. He is based in Marseille, France.
August 3, 2019 | THE ARAB WEEKLY
Former Syrian prisoners put experience in Adra Prison on stage
July 18, 2019 | AL FANAR MEDIA
Former Syrian Prisoners Reenact Their Experiences on Stage
December 19, 2017 | LA FILATURE
X-ADRA - Un projet de Ramzi Choukair
Video from the artist’s YouTube channel
Previous
SHARE