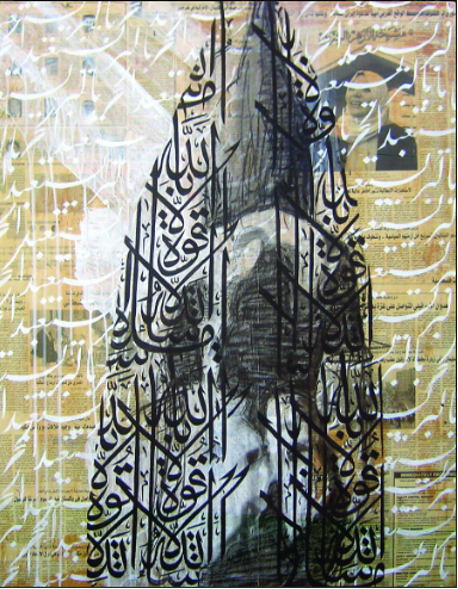 Translating to 'the stranger' or 'the strange one,' Al Ghareeb is, in the words of Ayad Alkadhi, “biographical.” The collection captures his own thoughts and feelings about a range of “personal, social, [and] cultural topics”—including the torture of Iraqi prisoners detained in US custody at Abu Ghraib prison.

In the spring of 2004—just over one year after the US-led invasion of Iraq—photos emerged depicting prisoner abuse inside Abu Ghraib, at the hands of American military forces. The publication of these photographs would come to irreversibly alter Alkadhi's artistic trajectory. Prior to their release, the prolific creator had chosen to avoid explicitly political issues within his art, electing instead to observe and honor Iraq’s cultural heritage and calligraphic tradition. In a 2009 interview, however, the artist acknowledged that “[a]fter Abu Ghraib, something switched.” For Alkadhi, the photos—so complete in their depravity—marked the moment “when all humanity destructs,” and it becomes acceptable—even officially authorized—to “insult another just because of where they come from.”

Born and raised in Baghdad, Alkadhi is “united in nationality” with the individuals who were imprisoned, tortured, and denied their most basic rights inside Abu Ghraib. As if to call attention to the fact that he himself “come[s] from” the same country as the photographed prisoners, Alkadhi invokes his own image within the Al Ghareeb series. Indeed, it is the artist himself who appears on the canvas as the sole human subject within each of the works—perhaps to make explicit his own personal feeling of being a ‘stranger’ or ‘the strange one’ as an “Iraqi living in the US during the US invasion of Iraq.” Or, perhaps this aesthetic choice is intended—as artist and academic Safdar Ahmed suggests—to “implicat[e] the viewer” more firmly in the dehumanization and humiliation being portrayed. In the first piece featured above, titled “Point Before Break,” Alkadhi wears a collar connected to a chain that extends beyond the parameters of the canvas. Although the collar and chain are formed of Arabic calligraphy, the work is a clear reference to one of the most widely recognized photos to surface from Abu Ghraib. Published in The Washington Post on 21 May 2004, the photograph depicts a naked prisoner lying on the floor with a leash fastened around his neck, held at the opposite end by an American female reservist. By visually portraying himself in a manner so explicitly reminiscent of the photographed prisoner, Alkadhi “awakens viewers to the realities of war, prompting them to question their ideals.”

The provocative use of calligraphic text further reinforces and accentuates the magnitude and meaning of the abuse being perpetrated within the pieces. Alkadhi has often cited the significant influence that his grandfather, Dr. J. Said, had on his childhood as well as his artwork, noting that his approach to calligraphy “began as an homage” to the late professor of poetry and literature. Gradually, the blending of image and text evolved to become a hallmark of Alkadhi’s work, with the latter employed as “a direct visual link” to Arab culture and heritage. Although the artist integrates calligraphy in “incongruous,” illegible ways or “to express noise” in many of his other collections—including Infinity in Blue—he opts in Al Ghareeb to incorporate the calligraphic text in a more deliberate, precise, and coherent style. Not only is the script meticulously and masterfully rendered; it also shares the foreground of the respective works with Alkadhi, who deftly manipulates the arrangement of the words to form the collar and chains. In a profile of the collection, the artist explains the significance of the calligrams, and the additional power that this technique confers upon the message being imparted: “[Y]ou not only take the words … but also you’re going to put them into an image, into the boundary of an image. So [it is] not only the words [that] mean something, but [also] the words combined” with the object(s) that they formulate. It is only through this fusion of both word and image that the meaning and intention of Al Ghareeb can be most fully represented and expressed.

Even so, Alkadhi still had more to say about the prisoner abuse perpetrated at Abu Ghraib. Al Ghareeb in a sense presents as a kind of prelude to the artist’s subsequent work, particularly Father of No One’s Son (2007-2008) and Infinity in Blue (2008-2020), which each continue to challenge the official, ‘security’-centric discourse to which the US government has clung in order to ‘justify’ and excuse its invasion and occupation of Iraq in general, and its torture program in particular.