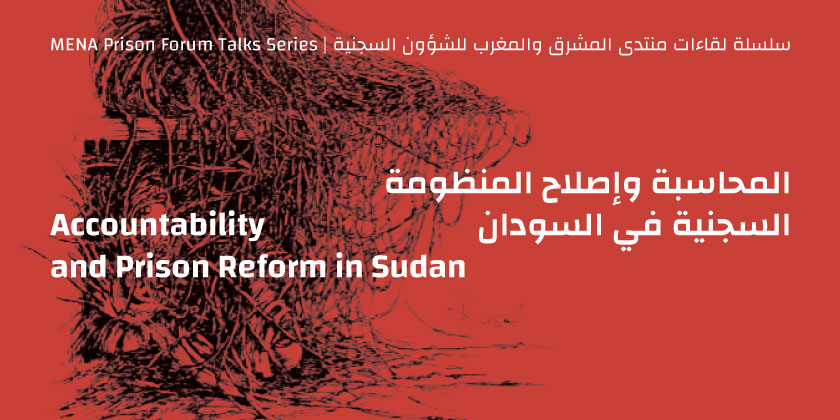 The MENA Prison Forum held a second conversation on carceral dynamics in Sudan on June 23, 2022. This talk built on dynamics and elements discussed in the May 26 talk between the MPF, Wini Omer, and Magdi El Na’im. This second talk was between the MPF, Dr. Farouk Mohamed Ibrahim, a human rights activist and one of the first Sudanese who spoke out about detention and torture in the Sudanese secret prisons, or “ghost houses,” and Madani Abbas Madani, an activist and former minister in the transitional Sudanese government.

Marwan Abi Samra of the MPF opened the talk by recapping some of the key discussion points raised in the first talk on prisons in Sudan, which focused on the use of torture and imprisonment by Omar al-Bashir’s regime, the role Islamists in the country played in the prison system, and the dynamics of racialized, religious, and gendered targeted violence that focused on non-Arabs, non-Muslims, and women in Sudan.

This second talk with a focus on Sudan predominantly addressed the need for documentation of carceral experiences in Sudan as key for accountability and prison reform in the country. Dr. Ibrahim was arrested and tortured in a “ghost house” in Sudan by the country’s former vice president, Nafie Ali Nafie, and he played a vital role in prosecuting perpetrators of torture in these sites. He was held in these secret prisons for twelve years and experienced various forms of torture, much of which has been detailed in the various reports he has filed (see here for one such report). He described the ghost houses as sorts of labs for experimentation in the different types of torture, and as a type of training ground for perpetrators of the torture. He noted that he personally knew several of his torturers, either his former colleagues from the University of Khartoum where he taught, or due to their position as high-ranking members of the Sudanese government. The unusual presence of prominent political figures in these clandestine centers was discussed: Dr. Ibrahim noted that this unusual dynamic could be due to the regime seeking to spread an extensive atmosphere of fear in the country, as well as due to a desire of high-ranking officials to show their willingness and adherence to using violence on behalf of the government in rejection of any moral or political values. Madani further elucidated dynamics within the Sudanese regime that supported the involvement of prominent leaders in the torture, namely that the regime strongly prioritized the end of any forms of opposition to its rule, so as an ideological priority, the regime was invested in showing that the leadership was overseeing and undertaking repressive violence. He also noted that the presence and involvement of high-ranking officials gave confidence to lower-ranking members to use violence similarly.

The conversation subsequently addressed the use of threats of rape in the ghost houses, and the hypocrisy of using a tool such as rape against men by a fundamentalist and Islamist regime, but the use of the threat and the actual use of rape in these clandestine detention sites was another tool to enshrine the power and extent of regime actions to suppress any opposition. It also focused on universities as targeted of the Sudanese regime, as the open and liberal systems of higher education in Sudan was opposed by the Islamists groups who instead sought for the education system to form and shape Sudanese citizens under a comprehensive education curriculum that encouraged an Islamic view of the world, across secondary and tertiary education in the country. In fact, Dr. Ibrahim was in part targeted because he was accused of teaching Darwinism, which was seen by the Islamic fundamentalists as anti-Islamic.

The overall prison system in Sudan was also discussed: namely the stark differences between the ghost houses and the official prisons. Dr. Ibrahim spoke about his transfer from the ghost houses to Kober Prison, where as a political prisoner he was subject to much better treatment. He spoke about the moment he arrived at Kober Prison: when the warden saw the extent to which he had been subjected to torture, he refused to admit him into the prison without a medical examination. From Kober Prison, Dr. Ibrahim launched his complaint against the ghost houses: he wrote a letter detailing his treatment and time in the secret prison, which was then printed and widely circulated in Sudan, including posted on the walls of the universities. Journalists who covered the letter were targeted, but the news still spread about the existence of these sites, and the torture and abuse perpetrated in them. Dr. Ibrahim’s personal status in Sudan was vital in helping spread the awareness of the ghost houses: he was a well-known member of academic, civil society, activist, and political circles, so his testimony was respected. He also not only documented his own experiences, but also continued to document and discuss wider carceral dynamics happening in Sudan. In compiling this documentation, his work has taken important steps in writing and codifying experiences, preserving them against fluxes in memory and time. Furthermore, this process of documenting these experiences is seen to be a first step in the path to accountability.

Madani then spoke to this legacy of documenting torture and abuses under the transitional government period in Sudan. He admitted that when Al-Bashir’s regime fell, there was interest in uncovering and documenting these acts of violence, but the efforts by both the civil society and the transitional governments did not successfully produce documentation nor judicial processes that could be used for accountability for these abuses. In the same vein, during the Q&A session, the participants insisted on the importance of documenting the violations committed by the regime of Omar Al-Bashir. However, they also emphasized that the documentation process should be followed by framing the necessary tools and strategies to end impunity against former and current ruling authorities. This is especially in light of the October 2021 military coup that pushed back against the hopes of the Sudanese revolution.

Dr. Farouk Mohamed Ibrahim is a former professor of botany at the University of Khartoum and a prominent academic and political figure in Sudan. In November 1989, he was arrested and tortured in one of the Sudanese “ghost houses” by former Vice President, Nafie Ali Nafi, himself. He played an essential role in documenting crimes of torture that took place in secret detention centers, and in exposing and prosecuting perpetrators, including major generals in al-Bashir’s regime. In 2012, Dr. Farouk Mohamed Ibrahim was elected and appointed as the general coordinator of the Sudanese Commission for the Defence of Rights and Freedoms. He is currently one of the most prominent human rights and freedom defenders in Sudan.

Madani Abbas Madani has a Master’s degree in Sociology from the University of Khartoum. During his studies, he joined the students’ movement and became an activist in opposition to Omar al-Bashir’s regime. He continued his political and civil work as the general manager of the Sudanese Development Call (Nidaa) in Khartoum. During the Sudanese revolution in 2019, he served as the spokesperson of the Forces of Freedom and Change (FFC) and he was a member of the negotiating committee with the Transitional Military Council. He was also the Minister of Trade and Industry in the transitional government from September 2019 until the military coup in October 2021.