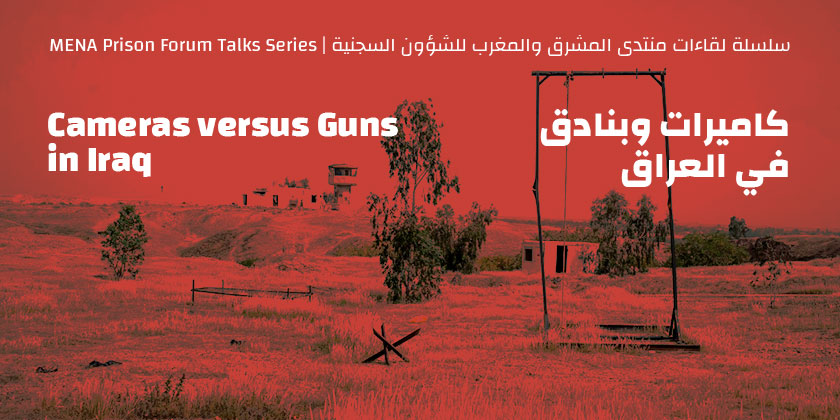 The MENA Prison Forum (MPF) was honored to host a conversation with photographer and filmmaker Ali Arkady on March 17, 2022. The conversation centered around Arkady’s upbringing and experience documenting violence in Iraq, and his role in recent campaigns calling for justice for crimes against civilians by the Iraqi army.

Arkady spoke about his childhood as an Iraqi Kurd under the Ba’ath regime in Iraq, and how he witnessed waves of demographic engineering that targeted his hometown. Under Saddam Hussein Arabization programs were implemented to move Iraqis into various parts of the country to increase government control. Arkady’s family subsequently left their hometown, and he returned on his own in 2003. Arkady comes from an artistic background, and there he once again witnessed demographic movements as Arabs who had been brought to his city in the 1970s were now forced to leave. Afterwards, he began to document everything with his camera, and his training focused on artistic work to documentation of dynamics on the ground, moving into journalistic work in 2009.

Arkady then began to gain acclaim for his work, and he meanwhile was processing how Iraq was being portrayed in certain ways in the media to support external narratives. This awareness led him to try to capture the truth of the situation on the ground in Iraq, instead of supporting political goals, aspirations, and narratives he could see were influencing external media coverage of the country. His work has since consistently been guided by a desire to link the history and the present in Iraq, and to try to provide something for the future, such as documentation of what was occurring in the country and to try to affect change. He gave an example of a project he did where he followed the story of an Iraqi soldier who was relying on prosthetics after he had been wounded in fighting, and his work increased awareness of the medical care needs of soldiers in the country. In this sense, he thinks of his work as photography and writing at the same time, as he tries to document in a way that conveys a message as well.

Arkady spoke about his experience documenting human rights violations: one of his most well-known body of works is a collection of photographs he took of torture under the Iraqi military of suspected ISIS members when he was embedded with a unit of the military from 2016 to 2017. Through this work he noted the similarities between the approaches to power and security that the Kurdish forces were taking as to the policies and practices of the Ba’ath regime, of torture and forced displacement. He continued to film crimes committed under state forces, and his most recent work has focused on documenting crimes against civilians, notably in exposing military shootings of civilian protesters during the protests in Iraq in 2019. There have also been resulting intimidation tactics used in response to Arkdady’s photographs in the search for justice: families of those killed and tortured have been intimitated and forced to deny army involvement in the violence, and Arkady himself had to file for asylum in 2018.

After he left Iraq, Arkady has kept searching for opportunities to release and to openly share the pictures he photographed back in 2016 and 2017. Meanwhile, he has been witnessing the culture of impunity and the continuation of styles and patterns of violence. In quest of justice, Arkady has been giving talks with international human rights organizations, and his efforts for documentation reflected the importance of the photo to achieve accountability. In this regard, Arkady’s work reached an important phase when his photographs were featured by “End Impunity in Iraq'' organization during its ​​recent campaign against Omar Nizar, a police lieutenant colonel. Nizar, who is accused of committing human rights violations, including rape and orders to kill unarmed protesters during the 2019 October Revolution, is now on trial. Arkady mentioned during the talk that Nizar’s trial should be regarded as a first step that can improve the state of justice in Iraq. On a personal level, Arkady does not wish Nizar to face a death sentence. However, he hopes that this trial will redefine power relationships between the authorities/military, on one hand and civilians, on the other hand.

During the Q&A session, the audience expressed their gratitude to Arkady and to his important work that challenged the silence against the crimes of the Iraqi military and its soldiers who are often considered as patriotic heroes. In this regard, the audience expressed the necessity of adopting different means and strategies that can reveal unspoken atrocities in Iraq. Moreover, one comment illustrated that the campaign against Omar Nizar and other future ones should not be limited to social media platforms and virtual hashtags. On the contrary, these campaigns should be accompanied by a daily groundwork through which the Iraqi community can feel and enhance the resistance, if not the termination of the culture of impunity.